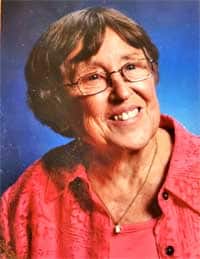 Alice Jean (Snyder) Carter was born on Monday, October 5, 1931, to Ralph and Lillian Snyder, a Methodist minister and his wife, who served a small church in Newcastle, Wyoming. Alice was the youngest of three children and she spent most of her childhood in small towns in Wyoming where she was involved in church activities, piano lessons and Girl Scouts. She loved the outdoors, camping, bird watching and crafting. loves that stayed with her for the rest of her life.

After graduating from high school, she began her college career at Colorado State College of Education, now known as Northern Colorado University in Greeley, Colorado. It was there that she met her best friend and husband of 41 years, Glenn Carter. Glenn, like Alice, was studying to be a teacher. After graduating, they both taught in Colorado for a year, until Glenn was drafted into the military and stationed in Huntsville, Alabama. It was there that he began his career in computer programming.

Alice and Glenn moved to Los Alamos in 1956 with their first daughter, Kathryn. They had two more daughters, Roxann and Mary Alice, and for the next few years Alice spent her time raising her family. She was very involved in the church and the Girl Scouts, and she continued to take piano lessons and teach piano beginners. After the girls were nearly grown, Alice returned to teaching – first as a teacher’s assistant, then returned to school to earn a master’s degree in special education. She worked for 18 years with Los Alamos schools teaching special education until her retirement in 1991. Alice was also an excellent seamstress and made many dresses as well as three beautiful wedding dresses.

In 1994, Alice lost the love of her life. She wrote this shortly after her death: “Looking back on my life, I realize that my 41 years with this remarkable Glenn Carter were the most formative years of my life. When he left for a better place, I wondered how I was going to be able to do without him. But I realized that he would want me to continue to pursue my interests and my dreams.

And continue, she did. Alice became involved in prison ministries, took many trips on barefoot cruises, continued to bird watch all over the world, taught Bible classes, and continued her quest to deepen her spiritual life. She has traveled all over the world, to more than 40 countries, often taking her children and grandchildren with her. Alice learned her whole life and visited each state capitol where she took a picture of the capitol buildings for her scrapbook; she has a picture of them all. Alice has walked the Great Wall in China, been bitten by an Icelandic horse, sang in Notre Dame Cathedral, got lost in northern Israel, panned for gold in Alaska and saw puffins in Newfoundland.

Alice was also a devout follower of Christ and she served on missions in several different countries. One of his favorite assignments was working with orphans with special needs in Russia. Her family and friends always believed that there was a special angel watching over her in all her adventures. We will all miss her terribly, but we do know that on May 15, during the Blood Moon Eclipse, Alice took Jesus’ hand and went with Him to Heaven.

Alice is predeceased by her husband Glenn L. Carter; her parents Ralph Findley Snyder and Lillian Doris (Ward) Snyder; his brother Charles (Chuck) Snyder; and her sister Lois Janet (Snyder) Misfelt. She is survived by her daughters and their spouses Kathryn (Douglas) Hirt, Roxann (Rico) Saavedra and Mary Alice (Richard) Overmier; his grandchildren Rebecca (Richard), Derick, Rachel (Matt), Sarah (Todd), Alicia (Sean) and Drew. She is also survived by 8 great-grandchildren, the last born three days after her death and named Finnley Carter in her honor.

Services will be held Friday, June 10, 2022 at Covenant United Methodist Church in Albuquerque, NM at 1:00 p.m. and a funeral service on Saturday, June 11 in Los Alamos, NM at Guaje Pines Cemetery at 10:00 a.m. where she will be buried next to Glenn .

In lieu of flowers, please donate to any Christian charity of your choice that cares for and feeds children in need.

Please visit our online guest book for Alice at www.FrenchFunerals.com.