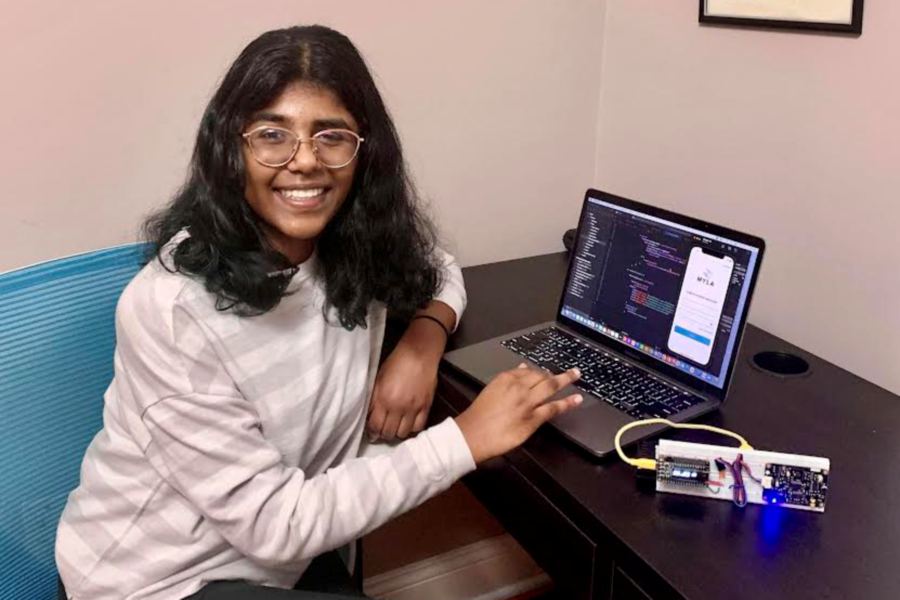 In recent years, there has been a national focus on encouraging more students to participate in STEM (science, technology, engineering, and math).

Particular emphasis has been placed on increasing the number of female students pursuing careers in STEM fields and, in Cheshire, the results appear to be bearing fruit.

A total of eight Cheshire students recently participated in the Connecticut Science and Engineering Fair, where middle- and high-school-aged attendees were asked to design and build devices with real-world applications. The event, held March 7-19, was held virtually, with presentations and judging online. However, even with the restrictions maintained, students were able to showcase their creations and receive constructive feedback.

And for some local students, prizes were awarded.

Suchita Srinivasan, an eighth-grader at Dodd Middle School, and Avery Fowler, a seventh-grader at St. Bridget School, were two of 16 finalists chosen to compete in the upcoming national Broadcom MASTERS competition.

Individual state science fairs have the ability to send about 10% of projects to Broadcom, but the Connecticut fair decided to send only 16 of the more than 600 projects that were submitted.

Of those invited, the top 300 are announced in early September and receive a prize package. The top 30 are then announced later in the month, with finalists receiving an all-expenses-paid trip to Washington, DC to compete in person as well as additional prizes for themselves and their school.

“So many (participants) at the Fair were extremely talented,” Srinivasan said. “A student had created a device to detect if a child was stuck in a well. I thought my project was really cool, but I knew how many amazing projects there were. I’m so glad things turned out the way they did.

Srinivasan’s submission to the Fair was a domestic violence warning device, designed to try to help those who might be victims of a violent crime. Srinivasan remembers hearing about a classmate who had been a victim of domestic violence and how difficult it was to understand what that experience must have been like.

“I kept thinking, ‘I wonder what happened to him?’ “recalls Srinivasan. “It was just something that really stuck with me.”

The college student started thinking even more about domestic violence during the pandemic, after reading a statistic that showed such incidents had increased dramatically throughout the public health crisis.

“It was really alarming to see that during the pandemic (domestic violence) increased by around 30%,” Srinivasan said. “I kept thinking about how lives could be changed in an instant.”

The device uses an analog sound level meter to detect what would amount to a loud cry. Connected directly to a mobile application, the device then sends an SMS to the individual’s phone, informing them that such a sound has been recorded and asking them to check that they are okay. If the recorded sound has nothing to do with a violent incident, the individual can report via a text response that all is well. If, however, the person does not respond, a subsequent text message will be sent either to the authorities or to someone listed as an emergency contact.

Srinivasan acknowledges that the device works much like a home alarm system, where the homeowner has seconds to enter their passcode and disarm the alarm upon entering the house. If the code is not inserted, an alert is sent to the authorities indicating that a possible break-in is in progress.

There is a big difference between the two systems though – no warning sound is heard when the text is sent, as the person in this situation may not want to alert their abuser that they are asking for help .

For Fowler, the idea for his project stems from his own life experiences.

“I have two goats,” Fowler explained. “They are identical and I cannot tell them apart. I wondered which was which.

The personal riddle got young Fowler thinking, was there an inexpensive way to easily identify the difference between the two goats and could it then be applied to situations where hundreds of head of cattle need to be identified? Whether it is to access health information to present to a veterinarian or to identify a lost goat, the uses are multiple.

“The idea was to have the best working materials at the lowest possible cost,” Fowler explained.

Farmers with hundreds of head of cattle can use expensive systems to identify their animals and access important information about each one, but Fowler was looking for a way to offer a similar service using hardware and software. already available. Initially, she hoped to use the microchips already inserted into her goats, but discovered that the technology was not compatible. Instead, she turned to using an ID collar and an app that could read the collar.

In order to complete the project, Fowler had to learn computer coding, which she admits took time.

“That was the biggest challenge,” she said. “I’m pretty new to coding, so just getting into this new thing, it took me a little while to get (comfortable).”

Fowler used Python coding, described as a “high-level general-purpose” programming language, as well as Raspberry Pi hardware – single-board computers to use as scanners. Ultimately, the project was successful, with Fowler being able to access the information using the affordable hardware and software.

“It was definitely a huge sense of accomplishment,” she said.

Upon entering the fair, Fowler admits to being very nervous, especially when it comes to interacting with the judges. “I was afraid I didn’t know any of the answers to their questions,” she laughs.

However, the girl behaved admirably, and when it came time to announce who the winners were, she and her family gathered around the television screen. “We had (an announcement) live on TV,” she said. “When I found out (she finished first), I was so shocked. I didn’t expect (to take) first.

As Fowler and Srinivasan advance to the finals, other winners look forward to showcasing their devices in other competitions to come. One of them is well known to Srinivasan: his sister, Sagarika.

For her project, Sagarika Srinivasan, an 11th grader at Cheshire High School, created a drunk driving detector. The device, connected to the driver’s side of a person’s vehicle, is alerted when a person sits in the seat, releasing it to fall in front of the individual and record their blood alcohol level via a breathalyzer. If the person exceeds the limit, an alert is sent to a contact.

Sagarika Srinivasan started thinking about the device after a discussion in her health class last November.

“We discussed how people have poor judgment…when they’re drunk,” Sagarika said, “and how the advice was don’t drink then drive, have a (designated driver), and more again. But I thought at that point, so many other things go through people’s heads. They may feel like they have to say, ‘I’m fine, I can drive.’

This realization prompted Sagarika Srinivasan to create a device that would immediately prompt the driver to check their own sobriety, giving them the ability to take a moment and make a more informed decision.

For her creation, Sagarika Srinivasan was named the High School Medallion Finalist for the Stanley Black & Decker Applied Science Awards. She and her sister will attend the next Connecticut Inventions Convention.