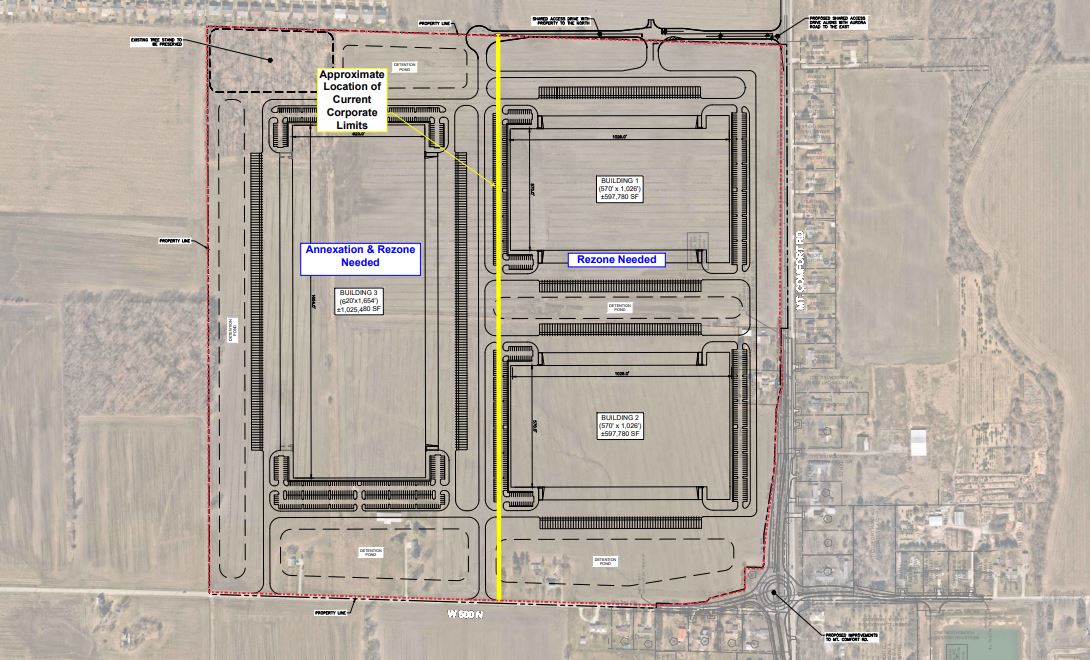 McCORDSVILLE — Half of a site a developer is considering for large industrial buildings is within McCordsville’s city limits, and the other half is in unincorporated Hancock County.

The company asks the city to annex the part that exceeds its borders. He has officials grappling with the need to broaden McCordsville’s tax base with concerns about the continued spread of speculatively built warehouses in the western part of the county.

Indianapolis-based Strategic Capital Partners is pursuing development on more than 160 acres at the northwest corner of Mt. Comfort Road and County Road 500N. The site consists mainly of agricultural land and a few residences.

A concept site plan submitted to the City of McCordsville shows three buildings, one over one million square feet and two nearly 600,000 square feet each.

The eastern half of the site is in McCordsville while the western portion is part of unincorporated Hancock County. Strategic Capital Partners wants the city to annex the western half and rezone the entire site into an industrial designation.

“I think it would significantly increase the city’s tax base if introduced,” Tuohy said.

The McCordsville City Council unanimously approved the annexation in the first of two readings. The city’s plan commission is due to consider a recommendation to council on zoning the site next week. At a future council meeting, likely next month, council members will vote on zoning and one final time on annexation.

“Our ability to annex is very limited, so when someone walks in and asks to be in town, I think we have to grab it,” council member Larry Longman said.

He and his colleagues, however, said there was still a lot to consider before their final decisions.

City council member Greg Brewer said he realizes McCordsville risks losing development interest in the area if it doesn’t annex. He added that he also realizes that in the case of Strategic Capital Partners, if annexation is defeated, the developer is unlikely to pursue rezoning with the county and will do a smaller project.

Brewer also expressed concern about the development prompting someone to want to pursue a similar project up north, which he said would not be suitable for industrial uses.

He noted that city officials have expressed a desire to see the area of ​​the Strategic Capital Partners proposed site closest to the northwest corner of Mt. Comfort Road and County Road 500N maintain its current commercial zoning and promote such uses in the future.

“I just got worried that we were turning the southern part of the city limits into a central warehouse,” he said, referring to the more than one million square foot building that Cincinnati-based Al . Neyer is growing in the area, along with dozens of other large structures under construction in western Hancock County.

The Strategic Capital Partners development would create jobs, Brewer continued, but likely not for employees who can afford homes in McCordsville.

“The type of housing we provide in this city is not suited to the pay rate of a lot of these workers,” he said. “We’re not going to have these people; we are not going to recover their income tax.

Brewer reiterated a desire he’s shared in the past to want to attract industrial developments with better-paying, tech-focused jobs.

But those kinds of employers aren’t attracted to places like McCordsville, at least not yet, some of his colleagues countered.

“Technical jobs go to Carmel, Fishers, places that have a lot of amenities at the end of the day,” said Ryan Crum, McCordsville’s assistant planning and construction manager.

McCordsville seeks to create such attractions through its downtown project, which is in its infancy.

Focus on income amid volatility