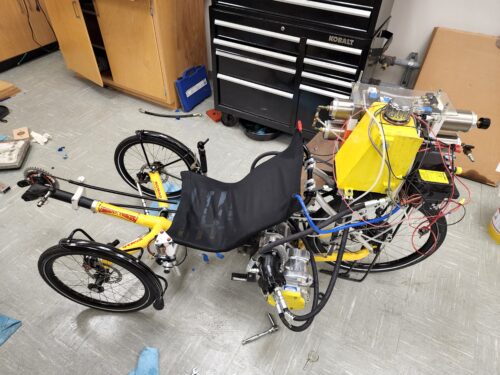 The competition in Ames, Iowa, is being held in person for the first time in three years. The contest will end on Friday, April 22.

“[The Challenge] strives to promote original thinking in a competitive framework by combining two technology platforms not normally associated with each other: human-powered vehicles and hydropower,” according to the website of the NFPA. “The Vehicle Challenge hopes to create an environment that results in unusual connections and breakthroughs, while supporting the learning and growth of hydraulic power industry knowledge.”

Murray State’s group competes with a hydraulic bike that uses a pre-built frame.

Electromechanical engineering and technology specialist Boaz Burnett said the bike can be powered by the pedals, like a traditional bicycle, but the pedaling action pumps fluid to spin the wheels.

This concept is known as “regenerative braking,” which captures kinetic energy and stores it as potential energy. This can be used to increase speed.

“The electronics are controlled using a programmable logic controller, which is one of the main focuses of our degree,” Burnett said.

Nate Heady, a specialist in electromechanical engineering and technology, said this energy is stored in accumulators, a pressurized storage device that contains a compressible gas. The “charge” of hydraulic fluid compresses the gas and begins to store potential energy.

“We can also just pedal the bike, which spins the wheel, and that will start storing energy as well,” Heady said. “With this energy we can do a lot. We can go very fast, very far, or somewhere in between.

Electromechanical Engineering and Technology Program Coordinator Jake Hildebrant was the advisor several years ago. He said that hydraulics is a fluid, usually an oil, used to do work based on Pascal’s law. The law states that an object immersed in a fluid experiences pressure from all sides.

Hildebrandt said hydraulics are very common in the industrial sector to move extremely heavy loads. More commonly, hydraulics are used in agriculture and in the braking and steering systems of most cars.

“It’s a great exercise for projects that students will face in industry,” said Hildebrandt. “It’s also a great opportunity to network with industry professionals. One of our student advisors this year is actually an EMT graduate who got his job through the relationships he created when he competed in the NFPA hydraulic bike competition a few years ago.

The hydraulic bike will participate in three races: a speed race, an efficiency race which will test how far the bike will go on a single load without pedaling and a relay race, where participants can pedal the bike if they wish. .

Hildebrandt said the biggest change was when the contest sponsor changed from Parker Hannifan, a motion and technology company, to the NFPA.

“Murray State won first place nationally in 2014 and 2018 and second place several other years,” Hildebrandt said. “We are competing with some of the top engineering schools in the country in this competition. Some of the regular engineering programs that compete come from Purdue, Akron, Milwaukee School of Engineer, Cal Poly.

After the competition, students can win cash prizes. Both Heady and Burnett cite the goals of wanting experience and recognition for hard work.

“I’m very proud of what our team has done,” Heady said. “Although I am the most experienced member, I have been surpassed by many team members who have never competed before… No matter who wins the competition, I am confident in saying that I have worked with some of the most talented people on the project.”