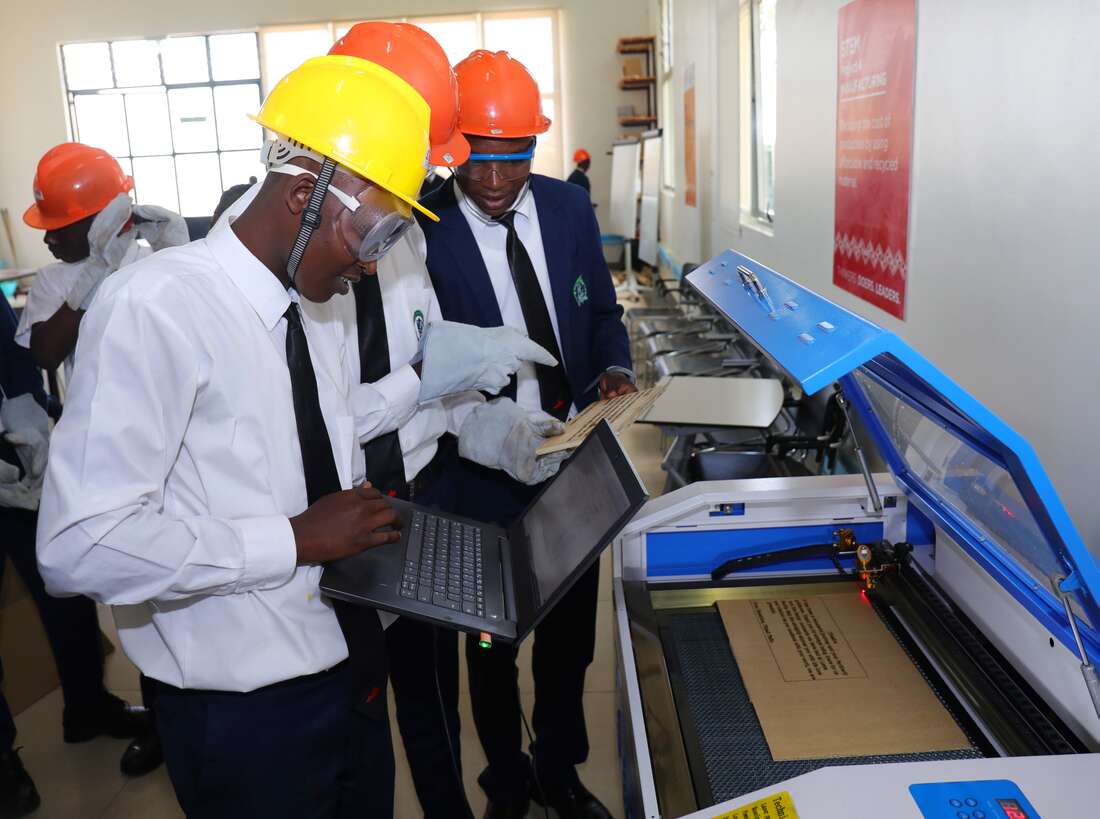 Anne Muthoni, a Form 3 student, is passionate about cardiology and hopes to build a user-friendly machine that will monitor heart rate.

“I have a passion for IT. The coding experience was enlightening, especially knowing that I could use different topics to do something really big,” she says.

Anne, Agape Mutua and Psalms Hendy are among the 42 high school girls doing coding. Coding in Kenyan schools is gradually becoming part of the curriculum as parents and teachers hope for better job opportunities in the digital economy.

Already, the government is piloting a new coding program in 100 primary schools and 50 secondary schools, all public, in the race to be on par with their peers in international private schools.

As global organizations become increasingly technology-driven and data-driven, programming is now essential. Developers have also become the new nugget for recruiters and businesses, across all sectors from health to education, with Kenya becoming a fertile hunting ground.

A Google survey in February shows demand for African computer software developers hit an all-time high in 2021 amid the global economic crisis. Kenya, Egypt, South Africa and Tunisia each added at least 2,000 developers in 2021, while Nigeria’s developer community grew by 5,000, a 6% increase from 2020 Morocco had 3,000 new software developers.

An interview of 1,600 software developers by Google revealed that 38% of African developers work for at least one company based outside the continent.

This has seen more schools in Kenya integrating coding lessons as part of the curriculum or introducing coding clubs. St. Ann, for example, launched a coding program in 2019 through school clubs.

With the help of software engineers from the Strathmore School of Business, students learn programming, web design in HTML and Python, a programming language.

“When we started the program, it was the first time some students saw computers. They always thought that computers were reserved for the big schools in Nairobi. They have come to appreciate and expect a positive impact in their lives,” said Peter Kinyanjui, Mentorship Program Manager.

Another school aiming to produce the greatest school computer programmers in Kenya is the M-Pesa Foundation Academy. It runs a science, technology and engineering, art and math (STEAM) and coding program that started in 2016.

Students learn about innovations and the use of technology in daily activities, however, over time it has evolved into a rigorous module based on basic, intermediate to advanced levels where it introduces learners to coding courses and prototyping at their own pace.

Students can choose to learn courses such as coding, robotics, product design, hardware programming, application technology, and drone technology, among others.

The academy targets children from modest backgrounds unable to continue their education after primary level and offers an International Baccalaureate (IB) program with career-related programs. Students have one and a half hours per week to pursue their STEAM module.

“When we launched the program, we ran it as a club. Due to the growing interest and positive impact, the program is now open to all learners,” said Ken Ronoh, STEAM Coordinator, Educator from the IB and the Business and Technology Education Council (BTEC).

Educators believe that coding is an essential skill. Coding skills help students improve their logic and problem solving skills, which should give them an edge, especially those interested in careers such as law or medicine.

“During the module, the learner will have carried out rigorous inquiry and research, learn to express their ideas, master conceptual thinking about the problem and experience practical skills. As a result, students who receive a quality STEM education are ready to become the next generation of innovators,” adds Mr. Ronoh.

Other countries like the United Kingdom and the United States have incorporated the principles of computer programming into their curriculum for children as young as five or six years old, when they start primary school. In the United States, former President Barack Obama launched Computer Science for All, an initiative to equip every student from kindergarten through high school with programming and coding skills “that make them job-ready from the first day”.

The pandemic has also led to increased adoption of digital models to reduce costs.

M-Pesa academy training, for example, is designed to spark the 21st century and learn about emerging technologies.

“The knowledge and discussions we learn in coding workshops give us the ability to solve real-world problems. Our most recent project was to dampen too much noise in our environment,” said IB Diploma Program student Galo Linzy.

“We have developed software that alerts people in offices and manufacturing plants to excess noise, reminding them to manage noise levels or use appropriate protections at work. The coding lessons introduce us to computer science and robotics where we also learn the art of effective research and creative thinking,” the 17-year-old said.

“When the program started, our computer lab was not well equipped but thanks to the coding course, we have sufficient capacity of computers and internet. This has been a benefit for students and teachers,” said added Mr Kinyanjui of St Ann Suresh Raga Girls, which is supported by the I&M Bank Foundation.

Some modules such as coding and app technology are affordable, such as TinkerCAD, a platform where students design products, code and simulate hardware, and Thunkable, a coding platform for building cross-platform apps.

“At the academy (M-Pesa), we have integrated many modules, some of which have had huge financial impacts. These include additive engineering and the use of CNC machines for product updating. Learners are also exposed to artificial intelligence, a module that involves the use of programmable Arduino hardware and its sensors,” added Alan Adlington-Corfield, the school’s executive director.

An acute gender gap still exists in the field, however, with women making up just 15% of the African developer ecosystem.

“There is a perception that begins at an early age. But I think that is changing and more and more girls are open to learning STEM,” said Lydia Mbegera, a Scrum Master (a framework for developing and deriving value from adopting solutions in a complex environment, with an initial focus on software development).

In Kenya, the ICT Authority is piloting the coding program – the Kodris program of Kodris Africa.

“We are excited to be part of Kenya’s journey to deepen digital literacy and prepare young learners to become architects of the digital age where they can be producers rather than mere consumers or spectators in this digital space by development,” said Mugumo Munene, CEO of Kodris Africa.