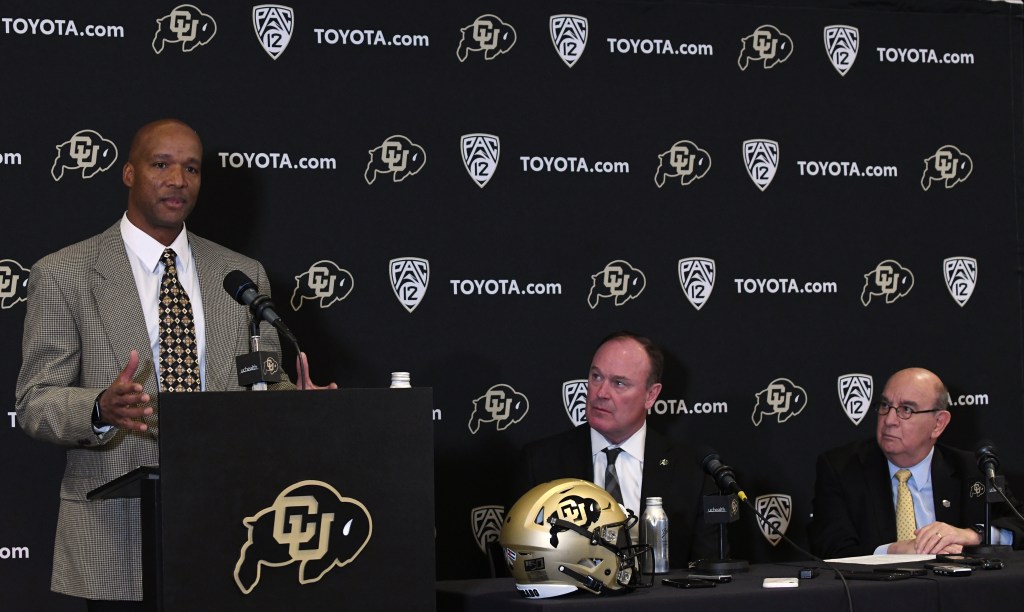 If the CU Buffs fire Karl Dorrell and then Phil DiStefano, Rick George should be next to go

If Saliman, the CU president who lost the “interim” tag earlier this year, really wants to put Buffs football — the college front porch — in order, he needs to start at the top.

Faded away. Thank you for your service.

Athletic director Rick George, who gave Dorrell the green light when no other Power 5 program would? Who brokered a deal that cost Michigan State $3 million to get Mel Tucker back, but could see CU paying at least double that — $8-9 million — to cut ties with Dorrell before the end of this football season 0-5?

Gone too. And also, thank you.

There are a dozen reasons to bail out The Dorrell Era before things get worse. A handful were execrable in Tucson on Saturday night in the Buffs’ 43-20 beating at the hands of Arizona. A group of Arizona CU beat 34-0 at Folsom Field a year ago.

Jayden de Laura, the Wildcats’ second-year QB, threw for six scores and for 484 yards on the Buffs — the latter tying Nebraska’s Joe Ganz in November 2007 for the most a CU defense has ever given up in a single game.

While Arizona’s offense has improved dramatically over the course of 2021, its defense hasn’t – the Wildcats (3-2, 1-1 Pac-12) entered Saturday’s game at the Ranked 125th in the nation and second-to-last in the conference in giving up 225.8 rushing yards per game and 6.1 yards per carry.

Yet, at halftime, in a two-point game, the Buffs had run it just 12 times…and thrown it 18 times.

Whether you judge talent, appeal, charisma, experience and entertainment value, Dorrell’s program lacks on all fronts. Which shouldn’t ignore the guts of five freshmen in particular — QB Owen McCown (186 passing yards, two touchdowns against Arizona); Anthony Hankerson (68 rushing yards) and Charlie Offerdahl (54 combined receiving/rushing yards) at tailback; Jordyn Tyson (42 receiving yards) at wide receiver; and Van Wells in the center, all of whom were forced to learn on the fly.

It’s not the children. That’s the big picture. The long view. The Buffs are 4-15 since Dec. 12, 2020. They’ve dropped five straight games by at least 21 points to open the year for the first time in program history. CU appears to be on a collision course with its seventh season of eight or more losses in the last 12 years.

The simple/practical answer would be to eat the money and take Dorrell, now 8-15 in three seasons as CU coach, out of the mix. The Buffs (0-5, 0-2) are out this week – the Bye opened as a 17.5-point favorite – and the voices who shouted at George on Twitter after his open letter to fans two weeks ago don’t get any calmer.

Alas, the Buffs’ football rot runs deeper than that. It goes higher.

If I’m Saliman, and if I’m really serious about turning Ralphie before she rushes into a ditch, I don’t want DiStefano or George anywhere near the process of finding or vetting or negotiating with the replacement. by Dorrell. Whether this replacement is necessary for this month of December or not.

You can’t really fix the porch without cleaning the house first. DiStefano’s public support for a set of matching blunders — former Pac-12 commissioner Larry Scott and Scott’s television network — was confusing at the time. Given the current chaotic state of the league, some of those feelings seem completely disconnected. Especially with reality.

As for George, his heart was in the right place when he went after Dorrell. But that heart was broken to the point of blurring some of the logic inherent in the process.

In the Buffs AD defense, Dorrell was a panic buy from left field at a panic moment from left field. Tucker dumped the Buffs in the middle of the night in mid-February, long after the traditional hiring cycle had cleared the shelves of conventional options.

In a world of transfer portals and name, image and likeness (NIL) freedoms, George’s takes both as noble, ethical, altruistic – and, in the context of how the SEC runs things, more a little anachronistic. High-profile college football is a dirty game, and player empowerment, while long overdue, has only made that game dirtier.

The Buffs need a full-time coach who is comfortable as a part-time salesman. Someone who knows that he will not only have to recruit someone else’s children, but will have to spend a lot of time and energy recruiting his own. Every fucking year. Every fucking month. Every fucking day.

Dorrell, who spent nearly all of his 2008-2019 fall season coaching NFL staff, didn’t sign up for it. And it is shown.

Hindsight makes us all geniuses. If we knew then – that a global pandemic was going to rock 2020 like a snow globe – what we know now, we might have done everything differently. Perhaps we would have given the reins to then-acting offensive coordinator Darrin Chiaverini that winter and dropped the chips.

And maybe in this parallel universe, we might have ended up limping to this sad point by the first week of October 2022 anyway. But I promise you this: we would certainly have arrived cheaper.