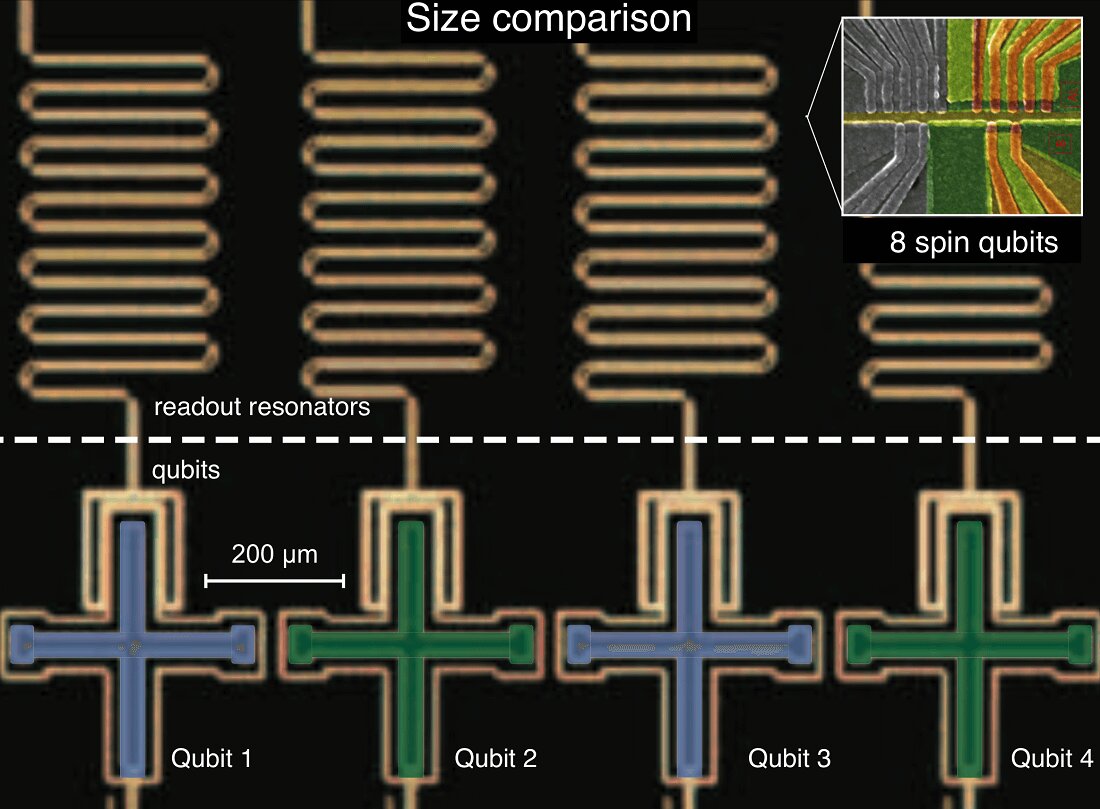 Quantum physicists from the University of Copenhagen report an international achievement for Denmark in the field of quantum technology. By running multiple spin qubits simultaneously on the same quantum chip, they overcame a key obstacle on the road to the supercomputer of the future. The result bodes well for the use of semiconductor materials as a platform for semiconductor quantum computers.

One of the engineering problems in the global marathon towards a large, functioning quantum computer is the simultaneous control of many basic memory devices, the qubits. This is because the control of one qubit is usually negatively affected by simultaneous control pulses applied to another qubit. Today, two young quantum physicists from the Niels Bohr Institute at the University of Copenhagen work in the Assoc group. Prof. Ferdinand Kuemmeth, have managed to overcome this obstacle.

Global qubit research is based on various technologies. While Google and IBM have come a long way with quantum processors based on superconductor technology, the UCPH research group is betting on semiconductor qubits, called spin qubits.

“Generally speaking, they are made up of electronic spins trapped in semiconductor nanostructures called quantum dots, so that individual spin states can be controlled and entangled with each other,” explains Federico Fedele.

Spin qubits have the advantage of maintaining their quantum states for a long time. This potentially allows them to perform faster and more perfect calculations than other types of platforms. And, they’re so tiny that a lot more of them can be compressed on a chip than with other qubit approaches. The more qubits, the more processing power a computer has. The UCPH team extended the state of the art by manufacturing and operating four qubits in a 2×2 array on a single chip.

The circuits are “the name of the game”

Until now, quantum technology has mostly focused on producing better and better qubits. It is now a question of making them communicate with each other, explains Anasua Chatterjee:

“Now that we have some really good qubits, the name of the game is plugging them into circuits that can tap into many qubits, yet are complex enough to be able to correct quantum computational errors. So far, research on spin qubits have gotten to the point where circuits contain arrays of 2×2 or 3×3 qubits. The problem is, their qubits are only processed one at a time. “

This is where the quantum circuit of young quantum physicists, made from the semiconductor substance gallium arsenide and no bigger than the size of a bacteria, makes all the difference:

“The new and really important thing about our chip is that we can simultaneously operate and measure all the qubits. This has never been demonstrated before with spin qubits, nor with many other types of qubits, ”says Chatterjee, who is one of the two lead authors. of the study, recently published in the journal X Quantum physical examination.

Being able to operate and measure simultaneously is essential for performing quantum calculations. Indeed, if you have to measure qubits at the end of a calculation, that is to say stop the system to obtain a result, the fragile quantum states collapse. Thus, it is crucial that the measurement is synchronous, so that the quantum states of all qubits are stopped simultaneously. If the qubits are measured one by one, the slightest ambient noise can alter the quantum information of a system.

The realization of the new circuit is an important step on the long road towards a semiconductor quantum computer.

“To get more powerful quantum processors, we not only need to increase the number of qubits, but also the number of simultaneous operations, which is exactly what we did,” says Professor Kuemmeth, who led the research.

One of the main challenges right now is that the 48 chip control electrodes have to be manually tuned and kept tuned constantly despite environmental drift, which is a tedious task for a human. That’s why his research team is now studying how optimization algorithms and machine learning could be used to automate tuning. To enable the fabrication of even larger qubit arrays, researchers have started working with industrial partners to build the next generation of quantum chips. Overall, the synergistic efforts of computer science, microelectronic engineering, and quantum physics could then drive spin qubits to the next steps.

The brain of the quantum computer that scientists are trying to build will be made up of many arrays of qubits, similar to the bits on smart phones. They will constitute the memory of the machine.

The famous difference is that while an ordinary bit can store data in state 1 or 0, a qubit can reside in both states simultaneously, which is called quantum superposition, which makes computing exponentially more powerful quantum.

The chip’s four spin qubits are made of gallium arsenide, a semiconductor material. Between the four qubits is a larger quantum dot that connects the four qubits to each other, and which researchers can use to tune all of the qubits simultaneously.

Provided by the University of Copenhagen

This document is subject to copyright. Other than fair use for private study or research purposes, no part may be reproduced without written permission. The content is provided for information only.