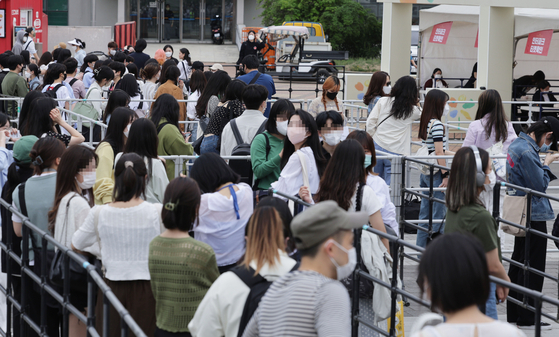 As social distancing measures have been lifted, more and more people are visiting concert halls and sports venues, but it is becoming increasingly difficult to get tickets.

A big reason: professional scalpers and software that many use. Many buy tickets through so-called macro programs and resell them at high prices. They are called “premium” tickets when sold online.

Many people buy premium tickets at exorbitant prices because there is no other way. When tickets go on sale online, you have to be fast – and resellers are faster thanks to their software.

For ticket purchase, information such as the date and time of a performance to the seat and payment method are automatically processed from multiple Internet (IP) addresses at once, significantly reducing the input time.

Kim Jun-hyeok, 30, a graduate student living in Ansan, Gyeonggi, was surprised when he recently tried to book a concert for his parents.

“Since tickets were supposed to start selling out at 8 p.m., I had an early dinner and waited in a PC-bang,” Kim said. “But the ticket sales site didn’t open until 50 minutes later. After I failed to get a ticket, I went to second-hand sales sites, and the tickets were selling for 300,000 won while the price initial was 130,000.”

Do-yeon Lee, a 28-year-old office worker, is a devoted fan of the Lotte Giants baseball team. She decided to go to a baseball game with a friend after hearing that sporting events had reopened with social distancing measures lifted. She tried to book online and wanted good seats, even if they were a bit pricey. But the tickets were all sold out.

She visited a second-hand sales site and was surprised to see a lot of tickets than she expected.

“Not only was a vendor selling tickets for adjoining seats, but he used to sell a lot of tickets before, so I thought it must have been a macro program,” Lee said.

“Even if we sue someone for interfering with sales using a macro program, they defend themselves by saying the demand was there,” a performance industry insider said.

Ticket sellers can try to block macros themselves, but even that is risky. “If a company tries to directly attack macro programs, there may be retaliation such as mass cancellation of tickets, so we are all very cautious,” said another entertainment industry insider.

Macros are getting more and more powerful because more people are learning computer programming and the legal system is not keeping pace.

“Even ordinary people who haven’t majored in computer programming can create a macro program in two to three weeks,” said Mr. Shin, 30, a program developer. “All developers know that it’s hard to punish the very act of making a macro program.”

Shin himself received an offer from a corporate sales team to create a golf course reservation program. “It takes about a week to write a macro program, and they pay you about 500,000 to 1,000,000 won for it. So refusing such an offer is not easy.

Since the laws are unclear, justice is muddy in the macro game. A programmer accused of producing and distributing macro programs in 2018 has been sentenced to one year in prison for violating the Information and Communication Networks Act. He appealed in October 2019 and was acquitted.

Macroeconomic bills are pending in the National Assembly. “Macro programs have caused enormous damage by impeding consumer purchases,” said Democratic Party Representative Lee Byung-hoon, who proposed an amendment to the Performance Law and the Promotion of Performance Law. national sport that would restrict the use of macros to purchase. tickets to shows and sporting events.

“The purpose of the bill is to publicize the standards of macro programs that cannot be punished under the current system,” said Kim Jin-sung, secretary in Lee’s office.

Analysts say clearer thinking about macros is needed. Is the problem the use of a macro itself? Are you booking too many tickets with macro programs? Or the sale of tickets purchased via macros at a higher price?

“There are pure functions for macros, such as uses in programming, so careless regulation of macro programs can cause unwanted side effects,” said Lim, Jong-in, professor of cybersecurity at the Grade School of Korea University Information Security.

“If the punishment rules are detailed individually, other macro programs that circumvent them may appear. Since macroeconomic problems are closely related to information technology, it is necessary to refer to cases in the United States. States and to enact legislation through international consultations.