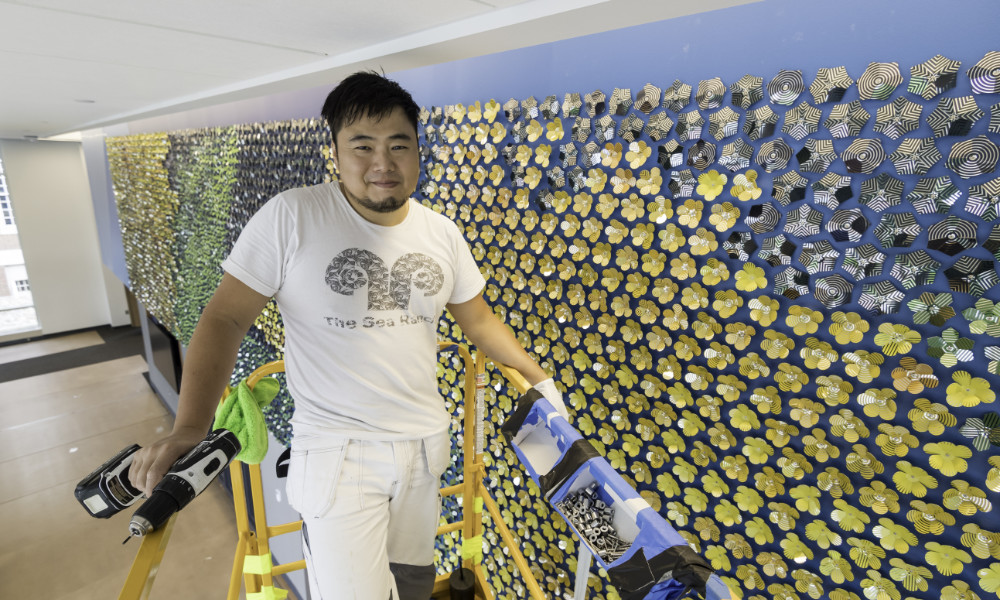 Artist Jay Yan poses for a photo as he installs a mosaic mural of nearly 8,000 stainless steel pieces in the main entrance of the recently completed Sloan Performing Arts Center. (Photo by University of Rochester / J. Adam Fenster)

Wall paint for two walls, a mosaic by artist Jay Yan, is the most recent public art commissioned by the University of Rochester.

The artwork appears at the entrance to the University’s new Sloan Performing Arts Center, a 30,000-square-foot, three-story building on the River Campus dedicated to creative expression through theater, dance and music. 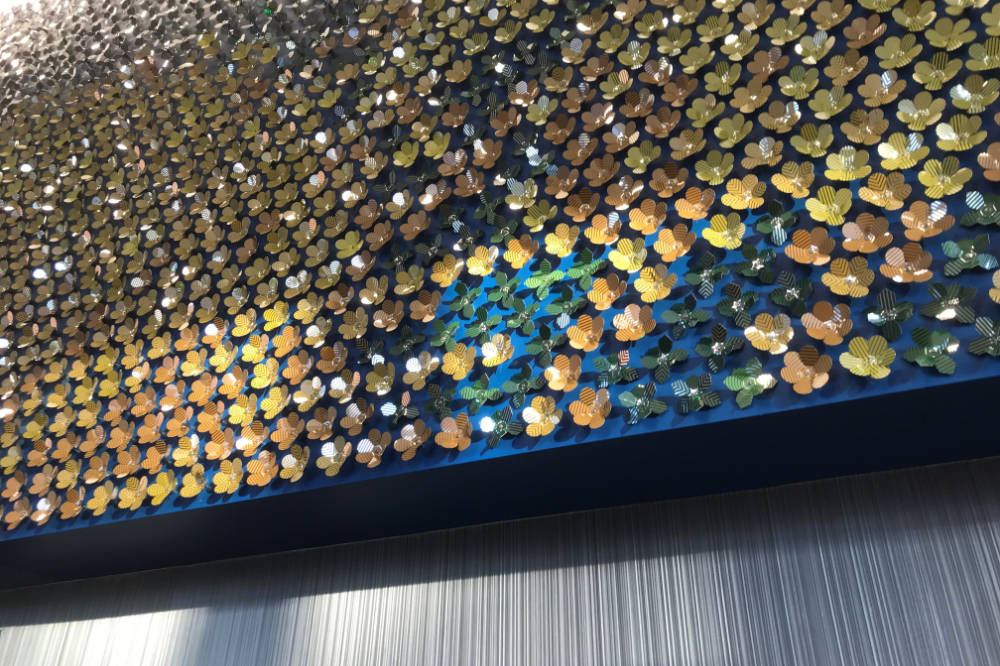 The individual discs of the mural are bent to reflect and shine in different ways as visitors approach from different angles. (Courtesy of Jay Yan)

“The hardest part of selecting a public artwork for a space like this is finding one that’s bold enough to spark conversation, but not so much that it interferes with the function of the installation.” Â», Explains Allen Topolski, associate professor at Department of Art and Art History who was part of the selection committee.

In Yan, the selection committee found a talent whose creative vision suited perfectly. 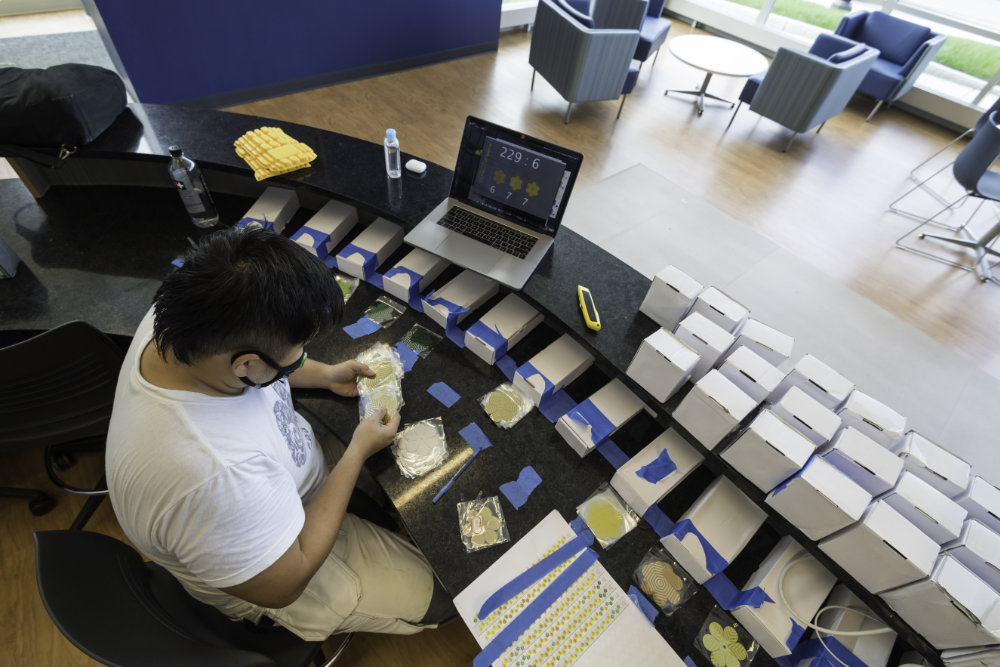 Yan graduated from the University of California, Los Angeles, where he studied media arts. For more than a decade, he has exhibited art installations and videos in galleries in the United States, Asia and Europe. Yan’s website shows her range of work, from dyed fabrics to looping video installations.

It was “struck” by the over 50 feet of wall space as an opportunity for a new kind of room. â€œIt’s pretty visible from afar, and you have different levels of experience as you get closer,â€ says Yan, who grew up in the New England area and is familiar with upstate New. York. The book is 8 feet from the ground and 62 feet wide. â€œItâ€™s the biggest song Iâ€™ve ever done,â€ Yan says. 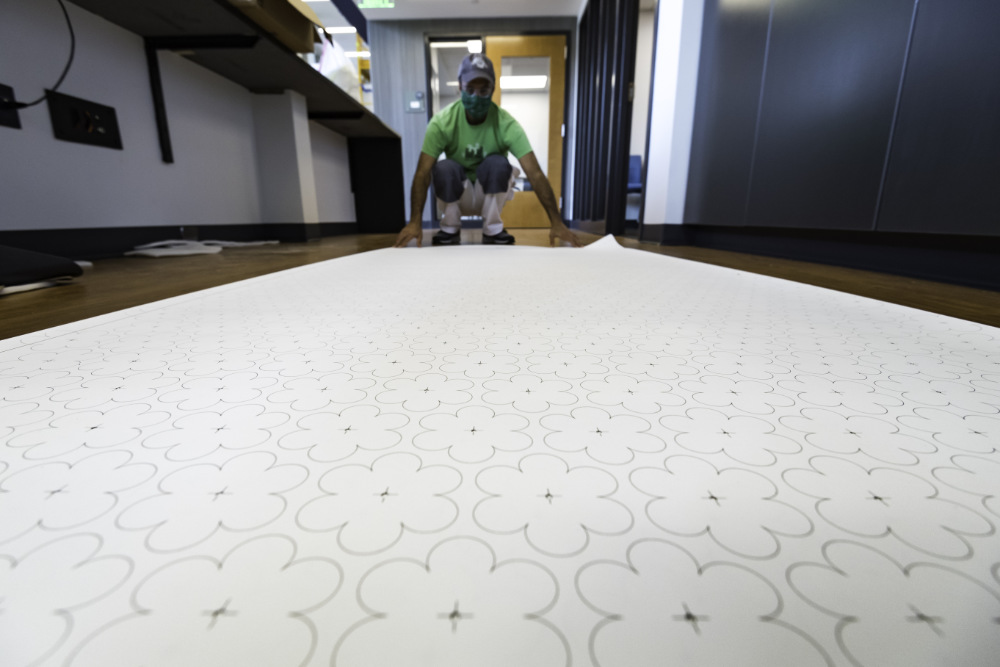 Yan’s friend Chris Coletta rolls out a print of the computer-generated pattern used for the mural. (Photo University of Rochester / J. Adam Fenster)

Chris Coletta and Joe Butler, Yan’s childhood friends, came from Boston to work on the installation, which was meticulously planned. They arrived on site every morning at 8 a.m. from August 18 to 24, when the River Campus was welcoming new first-year students.

Yan explains that the installation process involves placing a template on the wall to indicate the location of all the holes to attach a disc that will be drilled. â€œAnd then we’ll go through the entire wall to create a grid of holes to attach and install the artwork,â€ he says. 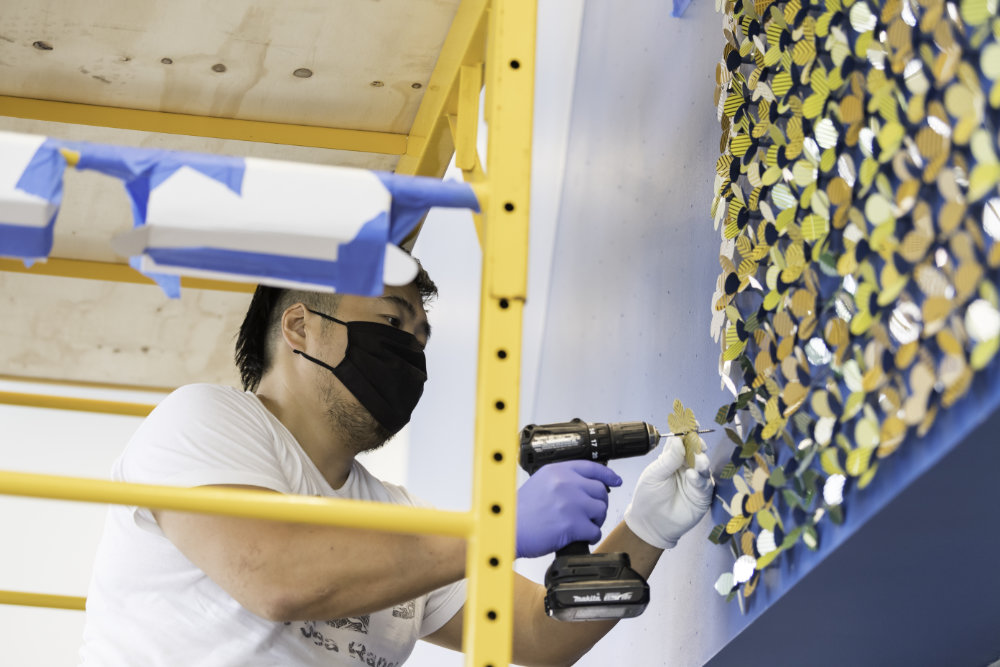 Yan and his friends each drilled thousands of stainless steel discs into the walls of the building. (Photo University of Rochester / J. Adam Fenster)

The mural features 7,820 mirrored discs in total, with 13 different types of discs. Shipped in boxes of six, each disc comes in its own sleeve to protect it from fingerprints. They have been laser cut to measure to their shapes and screen printed in color, making them durable. Although computer programming helped shape the work, â€œtechnology is not dominant,â€ Yan explains.

As you walk through the doors of the Sloan Performing Arts Center, the mural appears above and a glitter of color grabs your attention as you walk towards the Liebner Box Office and Mittleman CafÃ© in the Brian F. Prince Atrium. 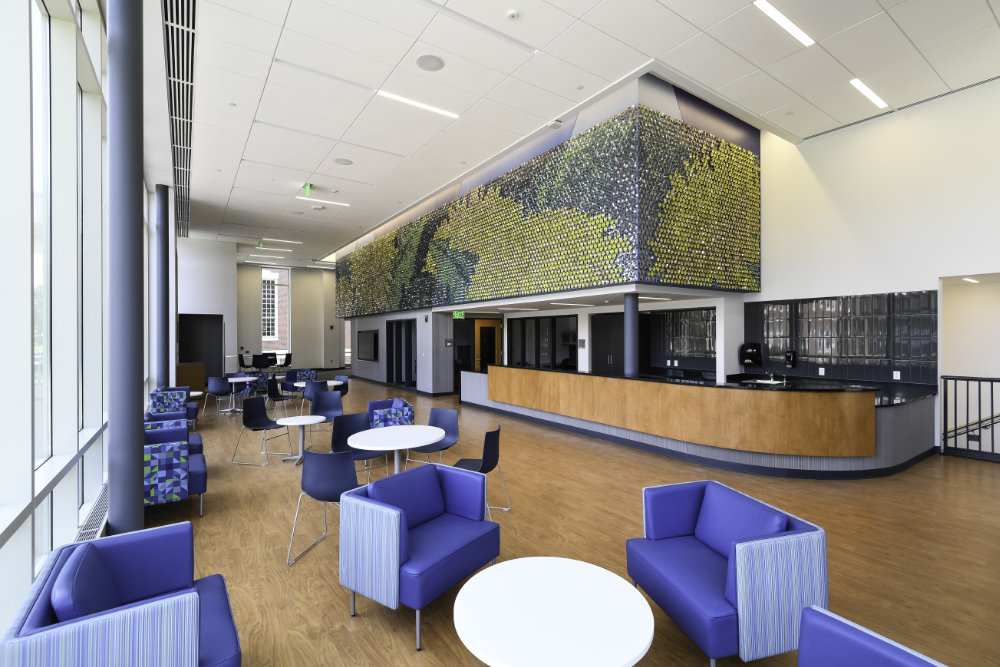 Dandelions, a symbol of Rochester’s perseverance, feature prominently in the fresco’s design. (Photo by University of Rochester / J. Adam Fenster)

The discs are not flat on the wall; instead, they’re bent to reflect and shine in different ways as you approach from different angles. Passers-by commented on how the mural seemed to move like a windmill during installation, but â€œit looks more like a light windmill,â€ Yan explains. Although the discs do not actually move, sunlight can deceive the eyes.

And since the windows of the Sloan Center face a roundabout on Wilson Boulevard, “every time a car passes, the light flickers all over the room,” Yan explains. 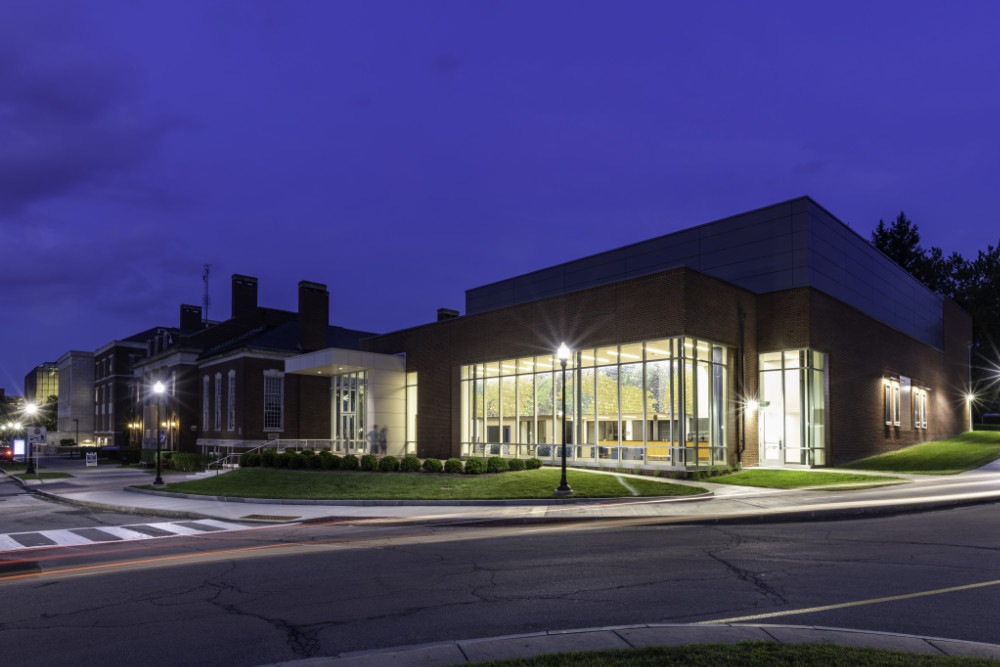 â€œTwo Wall Muralâ€ seen from the exterior of the Sloan Center on Wilson Boulevard at dusk. (Photo University of Rochester / J. Adam Fenster) 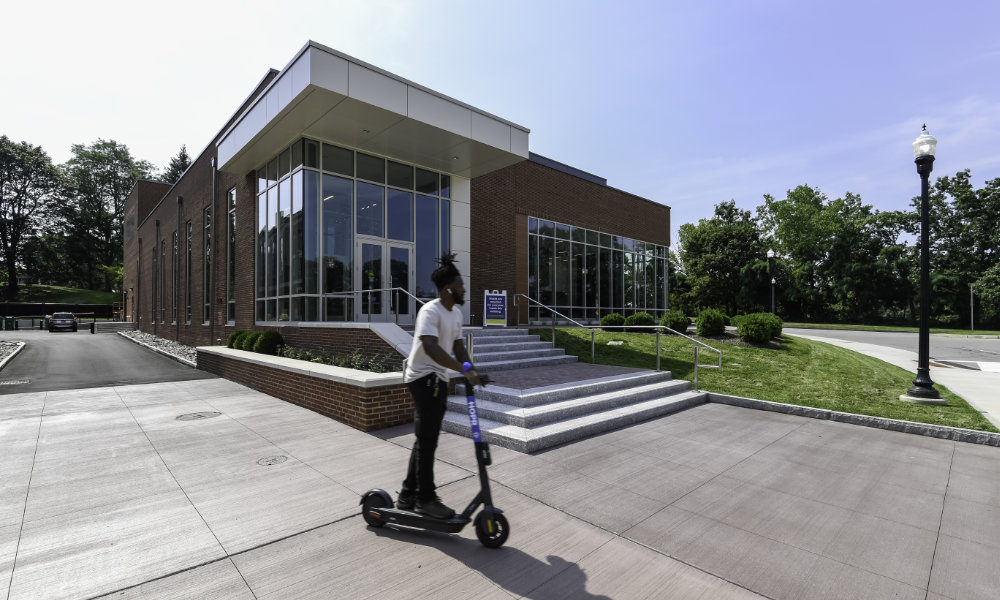 Sloan Performing Arts Center opens on the River campus
The 30,000-square-foot performing arts space opened at the end of August, adding a highly anticipated new building to the University of Rochester’s River Campus in time for the fall semester . The building will be fully functional by the end of the calendar year. 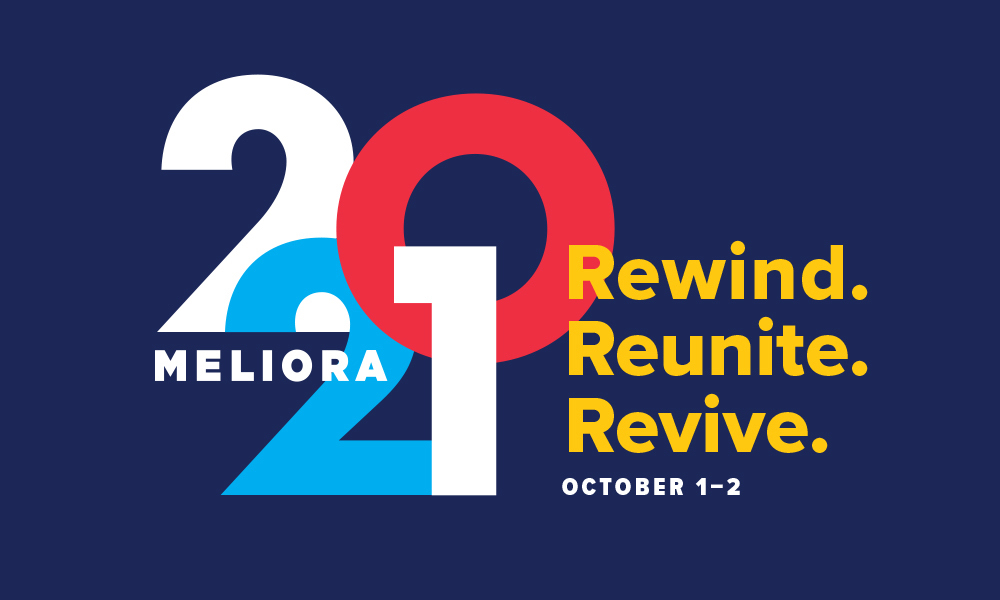 Meliora 2021, a new take on a popular fall weekend
The weekend of October 1 to 2 marks milestone meetings, celebrates the 2020 promotion and invites families to visit the campus. Special guests include Geena Davis as the opening speaker and Margaret Cho as the featured performer.