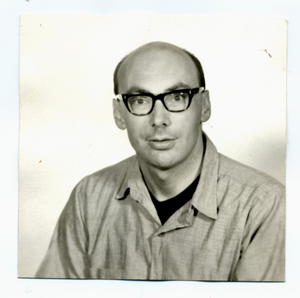 The archives of Queen Mary Emeritus Professor of Theoretical Computation, Peter Landin, are now available at the Bodleian Library, University of Oxford. A Larger-Than-Life Figure: An outstanding academic computer scientist, political radical, and bisexual gay rights activist, his work laid the foundation for the software that powers today’s laptops, desktops, and the Internet.

Dating from 1953 to 2006, they cover 22.35 linear meters (148 physical dimensions) and are written in English, French, German, Hebrew, Polish and Russian. With the bulk of his papers dating from the 1960s to the 1970s, papers from those years trace Landin’s creative pioneering contributions to the discipline of computer science, particularly computer programming languages, and then the gradual decline of enthusiasm and cynicism towards computing.

A stereotypical eccentric academic, much of the collection was preserved and written on the back of ephemera, such as posters, leaflets, brochures and correspondence from charities and organizations he supported. These fragments trace the path of a true scientific innovator.

His son Daniel Landin said: “I’m so glad the archives are accessible and appreciated! When my father died, his house remained a heaped monument to his brain, each wall then had a shelf built on it, and in front of many of these shelves, were in some cases other shelves, sometimes on wheels (cannibalized supermarket trolley bases!) This posed a huge challenge as to how to keep such an intense and personal archive, and when the Bodleian asked to keep it, my sister Louise, my mother Hanne and I were very grateful.

The Queen Mary’s Computer Building, located at 10 Godward Square, E1 4FZ, is named after her.

“In the early days of computing, software written for one brand of machine didn’t work on any other. Computer scientists wanted to define “programming languages” that could be universally understood. That this is normal today – Internet software, for example, can run on all types of computers – is a consequence of Peter’s insight that the meaning of a computer program could be identified in logic mathematical and freed from the control of the manufacturer. wrote Richard Bornat, a former computer science professor at Queen Mary University of London, in Peter’s obituary for The Guardian.

As Bornat notes, Peter was far from a bookish, prudish scholar, and he included famous jokes in the presentation of his ideas. For example, early programming languages ​​had names derived from acronyms and shorthand phrases that sounded very technical and machine-like: like Fortran (short for FORmula TRANslation) and Algol (short for ALGOrithmic Language), so when Peter first introduced a programming language, he called it ISWIM, for “If you see what I mean.”, because a key innovation was that it had a logical definition, which defined precisely what what each programming construct meant. His joke was a real technical breakthrough, and his computer language ideas form the basis for many later developments in programming languages, including Java and JavaScript applications that form the basis of many web pages.

After a stint as a researcher in New York and an academic at the Massachusetts Institute of Technology, he returned to Great Britain in 1967 and held a chair at Queen Mary College London, now Queen Mary University of London, where he remained for the rest of his academic career, most recently as Professor Emeritus of Theoretical Calculus. He enthusiastically taught students and colleagues with whom he worked as research assistants.

However, as Richard Bornat notes in Peter’s obituary: “Towards the end of his life, Peter became convinced that computing might have been a bad idea, supporting for-profit commercial interests and a surveillance state. , and that he had wasted his energies promoting it. But whether he likes it or not, his ideas underpin developments to this day. ”

Computing professor Paul Curzon said: “Having Peter’s archive housed at the Bodleian leaves a wonderful and lasting legacy, and is very appropriate given his achievements. This reflects his enormous stature and massive accomplishments in the field of computing as well as his grassroots activism for social rights, especially as a prominent gay rights activist. This will give historians of IT and the LGBTQ+ rights movement unique insight into his research and the campaigns he was involved in. Our research students working in the Peter Landin building should be proud of his role as the “founding father” of a significant part of computing and as a social rights activist.

Computer science professor Edmund Robinson said: “Holding Peter’s archive at the Bodleian is a fitting legacy for one of the country’s pioneering computer scientists. Having worked with him at the end of his career here, I suspect he would have scoffed at this establishment tribute while secretly delighted. Peter was a truly inspirational figure, embodying everything we think best of Queen Mary: a great scientist with a real social conscience and concern for diversity.

The catalog of the Bodleian Library of the Archive of Peter Landin (1939-2009), computer scientist, academic and gay rights advocate, is now online. Please visit:

Queen Mary University of London is a cutting-edge, research-intensive university with a difference – a university that opens doors of opportunity to anyone with the potential to succeed. Ranked 117 in the world and 1st in England for social mobility, the University has over 32,000 students in degree programs and around 5,000 staff. We are a truly global university: more than 170 nationalities are represented on our five campuses in London, and we are also present in Malta, Paris, Singapore and China.

Disclaimer: AAAS and EurekAlert! are not responsible for the accuracy of press releases posted on EurekAlert! by contributing institutions or for the use of any information through the EurekAlert system.