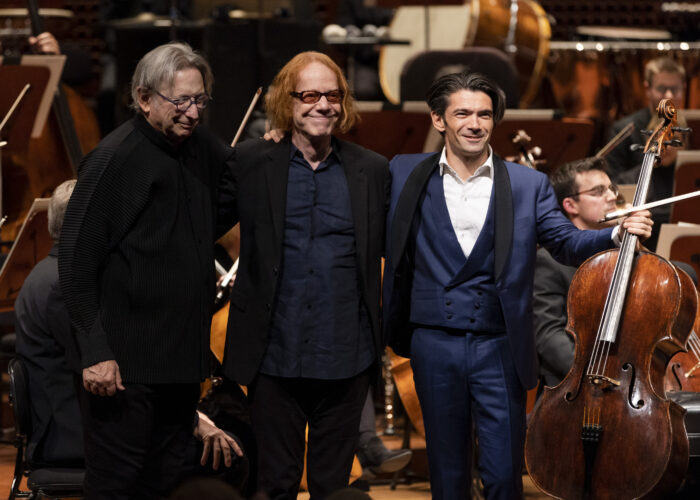 When the composer Danny Elfman moves its base of operations from the film studio to the concert hall, it brings with it a considerable array of creative resources.

That’s why an orchestral work such as his new Cello Concerto, which received its US premiere this weekend by the San Francisco Symphony Orchestra, bristles with so many recognizable imprints of the soundtracks of Elfman for films by Tim Burton and others.

The heavy, dark orchestral palette, for example, with burnished brass benches punctuated by eerie bells, instantly registers like an old familiar friend. So does Elfman’s slippery and slightly awkward harmonic language, based on a vast array of slightly different minor chords that transition from one to the next like a ghost materializing through a hidden doorway.

The part that remains, however, is the narrative that gives all of these elements dramatic meaning.

Thus, the performance of the piece at Davies Symphony Hall on Saturday November 12 — the second of three – recorded as a long, directionless journey through Elfman’s sketchbooks, a purse of often convincing musical hits in search of any overarching formal logic.

With the award-winning musical director Michel TilsonThomas making a welcome return to the podium, the Symphony – which commissioned the piece before the pandemic and had originally planned a 2021 premiere – rendered Elfman’s orchestral writing in all its colorful glory. A drum set of percussion provided a wealth of distinctive musical effects, and the swelling brass harmonies that tell you we are in the country of Elfman came with a shadowy pungency.

Gautier Capuçon, the brilliant French cello virtuoso for whom the piece was composed, also rose to the occasion. Whether sending torrents of rapid passages or intoning a long, sultry solo melody in the third of the concerto’s four movements, Capuçon seemed to have every aspect of the score under his fingertips effortlessly.

Yet for all the intermittent pleasures this concerto has to offer, the overall impression it leaves is lumpy and formless. Musical ideas come and go willy-nilly, with no discernible connection to each other or to a larger structure.

The piece lasts almost 40 minutes, but without a musical narrative to structure it, this aspect seems totally arbitrary. At some point in the last movement, I jotted down a note that Elfman was bringing a convincing conclusion to the piece – only to find that there were actually five minutes of music left to do.

The concerto is most seductive when it operates in short bursts of inspiration that require no development or elaboration. The rapid second movement, in particular, rings out in a flashing series of broken chords while challenging the soloist to keep up with the beat — a challenge which Capuçon fulfilled superbly. The main melody of the slow third movement, titled ‘Meditation’, casts an endearing charm before overstaying its welcome.

It is perhaps no coincidence that Elfman remarked during a question-and-answer session with the audience after the concert that the movements in the middle were the ones where he felt the most free – at this moment. There, he said, music “can go absolutely anywhere”. (He also humbly acknowledged, “I still consider myself new to this, even though I’ve written 110 film scores.”)

The two long outer movements of the concerto, however, spin tirelessly without establishing a clear reason for much of the musical content. Even in its most viscerally gripping form, the concerto boils down to episodes in search of plot.

As if to establish a cruel contrast, Thomas has framed the piece with two works from the classical repertoire that masterfully handle form, albeit in different ways. Stravinsky’s laconic and tangy “Wind Symphonies”, which opened the program, unfolds like a sequence of musical aphorisms, each chiselled with diamond precision.

In a more traditional but no less satisfying vein, Tchaikovsky’s sumptuous Serenade for Strings occupied the second half of the concert in a reading marked by robust tone and interpretive arrogance. Tchaikovsky closes the four-movement work with a kind of magician’s fanfare, revealing that the loud folk tune of the finale is actually a cousin of the grand main theme the listener remembers from the overture.

These are just two of the myriad ways a composer can treat form in a long concert work; there are many others. Without any of them in play, a piece is just a ride, no matter how appealing its component sounds may be.