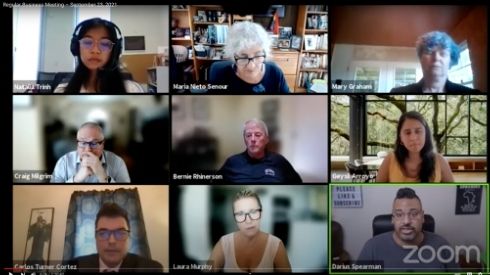 District chancellor responds to controversy at latest board meeting

Spearman, also chairman of black studies program and a teacher, called Cortez’s reaction to the American Federation of Teachers Local’s 1931 declaration on the occupied Palestinian territories as “a frightening precedent.”

“By using his position of power to prevent employees from defending basic human rights as educators, we believe that the goal of our work is to create a better and more just world and if we continue to ignore the mistreatment inflicted to any group of people, injustice anywhere is a threat to justice everywhere, â€Spearman said.

At the Zoom board meeting on September 23, Spearman noted that the Chancellor’s response was a very public reaction, posted on the district’s website, on social media, and emailed to all. district employees.

Cortez’s statement on the AFT resolution called for civil discourse, which Spearman said was seen as spurious and hypocritical.

Spearman went on to say that many felt offended by the resolution because it ignored the plight of Palestinians living under “a brutal and illegal occupation.”

Executive Assistant Margaret Lamb read a fair amount of mixed reviews in the form of comments from the public, primarily expressing their disapproval of the Chancellor’s actions.

â€œThe Chancellor’s statement makes me uncomfortable attending SDCCD courses,â€ wrote a commentator who identified himself as Inji Jaber, an SDCCD student and member of the Palestinian Youth Movement. â€œThe AFT resolution draws attention to the fact that Israel has violated many international human rights laws and has been officially designated as an apartheid regime.

Across the divide, a commentator who identified himself as City College faculty member Mona Alsoraimi-Espiritu has shown support for Cortez’s statements.

“The resolution adopted by our AFT chapter was by no means anti-Semitic,” wrote Alsoraimi-Espiritu. “When guided by data, logic and reason, he is clearly not offensive to any group.”

Responding to the public comment, Cortez said the district stands up for free speech as it codified its commitment to civility and diplomacy.

â€œThe district also respects the union’s right to engage in political advocacy, but the district takes no position on whether such activities are justified or appropriate,â€ Cortez said. “The district will not take or take opinions in favor or in opposition to the political opinions expressed by the union or any other political action agency.”

You can read more in-depth coverage of the discussion surrounding AFT resolution in this City Times article by Jakob McWhinney.

A complete list of all comments on the AFT resolution, both in support of and contrary to it, can be found online.

In addition, there will be an artistic event in which the students will participate.

The board recognized city president Ricky Shabazz for being selected from 25 leaders by the Aspen Institute for the Presidential Fellowship.

The Presidential Fellowship selects a small group of leaders to develop seminars, programs, and strategies to improve student success.

The city’s nursing program will host a joint site tour of the Accreditation Commission for Nursing Education and the California Board of Registered Nursing from September 28-30.

Latinx Chicano Hispanic Indigenous Heritage Month will be celebrated throughout the district in October.

Cortez also highlighted upcoming assembly bills that will have a direct impact on community college students.

AB-928, pending Governor Gavin Newsom’s approval, has the potential to adjust the challenges for many students transferring from community colleges to the Cal State and UC systems.

Cortez urged his colleagues not to support this legislation because it fails to address system-wide concerns about transferring students’ accommodation regarding automatic enrollment.

The other two laws AB-576, which would allow community colleges to offer closed courses on military installations with AB-927, this bill would indefinitely extend the operation of the statewide pilot bachelor’s program.