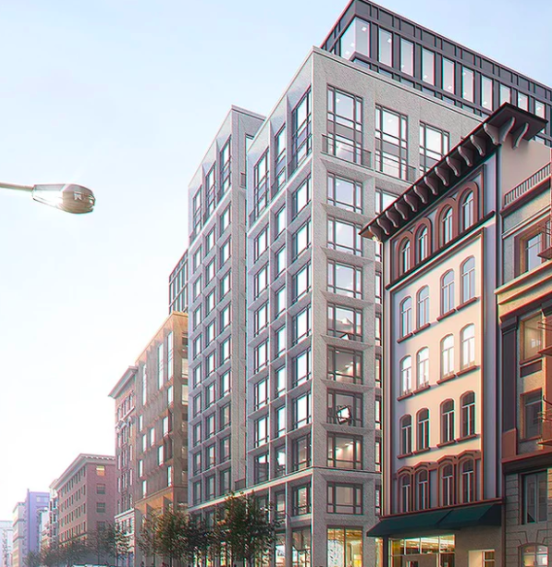 Real estate developers are always trying to find a way to take what might be a legitimate political interest and exploit it for immense profit.

In the 1990s, these were “live-work” dwellings. The city, trying to find ways to protect artists who had moved into empty warehouses a decade earlier and now faced eviction, established new rules that relaxed zoning and code rules and allowed people to staying in homes that might not have followed all the normal rules. for residential use.

Fine, until developers used this loophole to build high-end luxury lofts in what had been industrial areas, driving up property values ​​and driving out light industry. I watched this from my office in the Bay Guardian building on Mississippi Street at the foot of Potrero Hill: Sire after site that was once a warehouse, a hardware store, a place that offered decent blue-collar jobs has become a “ live-work” loft for tech workers.

Developers made their fortunes buying cheap properties and selling cheap built units for millions of dollars.

The latest craze is “group accommodation”.

San Francisco has always tried to provide low cost housing for people who cannot afford a traditional apartment. Single-room hotels have been and are a key source of affordable housing, and these spaces typically have shared bathrooms and units do not have kitchens.

But “group housing” today is a different thing: the developers of these projects essentially build dormitories for young, well-paid workers. The units are not affordable at all, but if the developer can cram enough people into them, the project will make a profit.

The latest example, at 450 O’Farrell, showed how loopholes in municipal legislation can allow projects designed to be married quarters to turn into upscale dormitories.

Sup. Aaron Peskin, Rafael Mandelman and Shamann Walton have introduced legislation that would better define what “group housing” means and, among other things, prevent the definition from being used to create what are in practice short-term rentals or small apartments expensive.

The Committee on Land Use Planning and Transport will consider that the legislation Monday/28 at 1:30 p.m.

The Committee on Budget and Finance will consider Wednesday/2 a proposal from Sup. Ahsha Safai who would regulate street vendors. It’s a bit tricky, and supers are going to have to deal with a wide range of issues.

A 2018 state bill decriminalized street vending and made it difficult for cities to regulate vendors. The idea, according to the supes Budget and Legislative Analysis, was

Other than the port, most of the city has no regulations on vendors. Here is the summary of the invoice:

Under the proposed ordinance, street vendors are required to obtain an Itinerant Vendor’s Permit or a Stationary Vendor’s Permit from Public Works to sell food and/or merchandise on City property, including including a public right of way or any other street, sidewalk, driveway, driveway or pedestrian path. Vendors who use an energy source, such as propane, must obtain approval from the fire marshal, and vendors who sell food must obtain a license to operate a food facility from the Department of Public Health. Separate fees may apply and be payable to the Fire Marshal and the Department of Public Health. Additionally, applicants must certify that they have obtained the food or merchandise through legal means and will retain proof of ownership or authorization for sale to be provided upon request.

Many vendors I see at the Mission will never be able to prove that they obtained their materials through legal means, either because they did not or because the informal economy that vendors occupy rue does not use receipts or sales documents.

I understand there are public health issues with selling food, and I understand the fire safety stuff, but the hassle of getting those permits is going to drive a lot of small vendors (e.g. those selling sausages wrapped in bacon with grilled onions, yum) on Mission Street.

How do you solve public health and safety problems without killing these micro-enterprises? (I’m thinking of the Tamale Lady, who went from bar to bar at night selling fresh tamales. She also used to come to the Bay Guardian at lunchtime. I ate a lot of her tamales, and so are my co-workers, and I’ve never heard of anyone getting sick from their food. Could they get a permit?)

From the Small Business Commission:

The Commission had a lively discussion about the merits of creating a licensing system for street vendors and was particularly concerned about the City’s creation of a program that might be difficult for people. Several Commissioners emphasized the following recommendations:

– The need for language translation, outreach through community organizations and cultural sensitivity to ensure smooth implementation of this proposal.

– Focus on a simplified authorization and application process, which could include an online application.

– Significant support for notification and technical assistance in the deployment of this proposal.

Whenever I see a bill like this, I always ask: what is the problem here that we are trying to solve?

Either way, this one is going to be tricky.

The full board will consider two different voting measures to better regulate Recology, the municipal operation of garbage and recycling. One measure would simply change the way the city handles ecology rates and practices, to eliminate the kind of corruption that has the FBI crawling all over City Hall.

The other would allow supes to put the entire contract out to tender, which is Recology’s worst nightmare.

It all depends, I suppose, on how the company reacts – if Recology plans to spend millions of dollars fighting even basic reform, then the supes might be willing to say: your whole 88-year deal that you gives a guaranteed private monopoly is going to be in play.

This meeting starts at 2 p.m.