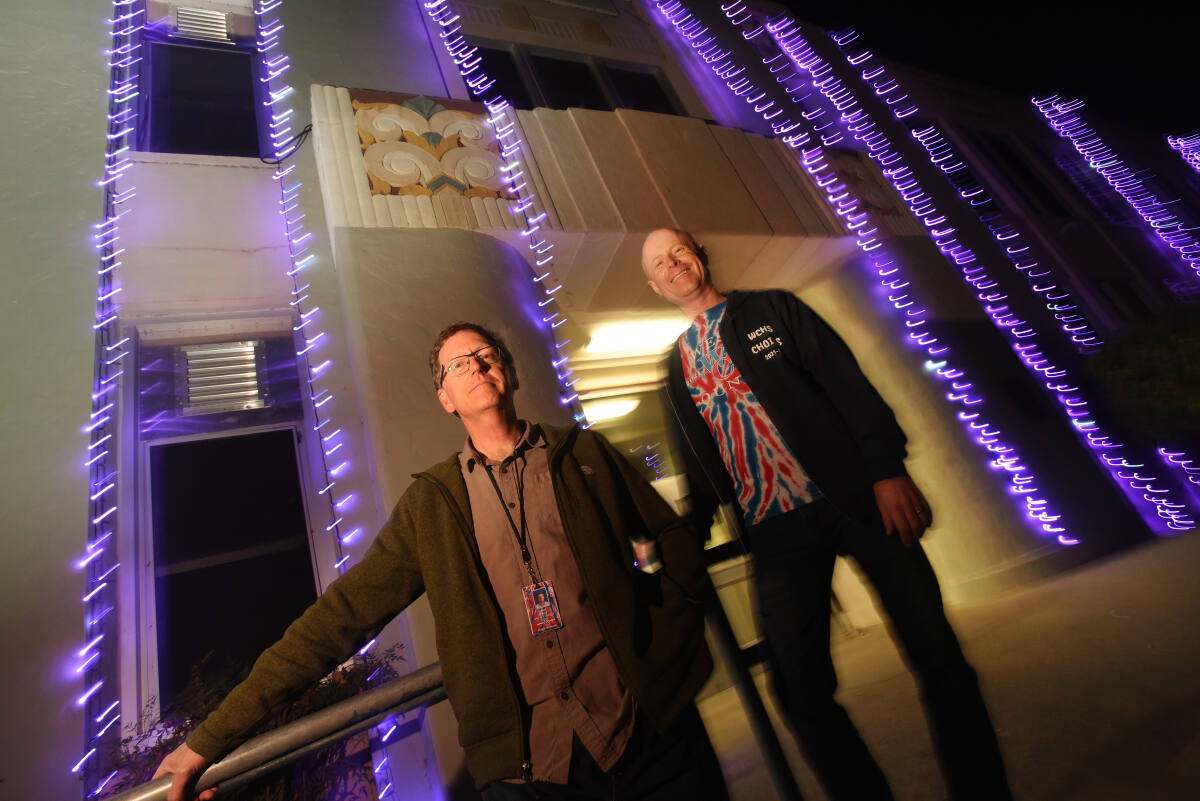 Part of an occasional series

The women’s basketball team hosted Justin-Siena on a recent night out, but that’s not why a small crowd gathered in the parking lot outside West County High School.

The Sevastopol School, formerly known as Analy, and soon to be renamed, features a distinctive facade, commissioned as part of a WPA project from the era of the Great Depression. This space now serves as a large canvas for a dazzling light and music show. Two thousand lights on garlands hanging from the roof of the school seemed to pulsate and dance to the holiday music coming from two all-weather speakers.

Designed and performed by West County professors Walt Hays and Andy DelMonte, with the help of a few students, the show lasts 32 minutes and will run continuously every night, between 5:30 p.m. and 8:30 p.m., until New Years.

â€œWe see this as a way to build community and bring us all together in a fun way,â€ Hays said.

On November 30, Devin Drew, his wife Megan and their school-aged son were part of the party. Sitting in the parking lot on a bench they pulled from the back of their van, the trio made a serious gash in a large bowl of popcorn as the iridescent sound and light washed over them.

Devin Drew described himself as a scientist with a soft spot for the performing arts. As “Ubi Caritas” played in the background – this ethereal version was recorded by the Encore choir of El Molino in 2009 – he praised the project for “bringing the community together.”

He was referring to the acrimony that has prevailed in the West Sonoma County Union School District since last March, when its board of directors, facing growing budget deficits, voted to consolidate Analy High School with High School. El Molino in Forestville.

Indeed, the night after the Drews bathed in the light show, the board voted to cancel the plan to rename the school, ensuring West County will return to Analy soon.

The vote sparked further outrage, leading to the exit of some 300 students from the class the following morning.

The student soundtrack, vocals raised in the song, “is kind of a counter” to this ongoing clash, Drew noted.

To Megan, the show looked like a “choir, band, and computer club” collaboration.

This is the idea of â€‹â€‹two seasoned teachers. When they first presented the project, DelMonte and Hays weren’t trying to cool down the debate between supporters of Analy and El Molino. They just thought it would be cool to bring a new tradition to the school that employed them.

Hays, who has been in high school for 17 years, teaches Maker and Computer Programming classes. DelMonte is the school’s choir director, who explained the Jay-Z inspired caption on the back of his hoodie (â€œI have 99 issues, but my pitch isn’t.â€) has also taught a wide range of courses in his 25 years in West County.

When DelMonte suggested a light and music show to the administration a year ago, he immediately got a nod, no pun intended. The conflicts that befell the neighborhood, following the decision to consolidate the two schools, made the slight extravagance an even better idea.

A pair of generous donations, from the Rotary Club of Sevastopol and the city’s iconic ice cream shop, Screamin ‘Mimi’s, covered most of the cost of the equipment, including LED strings, speakers and a wired pixel controller – the computerized nerve center of the show.

Before buying anything, they would check out the oracle of county music and light shows. Each December, Nathan Miller adorns his Santa Rosa home with a cutting edge extravaganza that makes the light show hosted by Clark Griswold, National Lampoon’s Christmas vacation, seems understated and primitive.

Miller met with the teachers at West County High over the summer and encouraged them to take the plunge. â€œHe gave us suggestions on equipment, suppliers, who to buy from, because we had no idea,â€ DelMonte said.

He and Hays complemented each other well. DelMonte, with his background in audio recording, was better suited for programming lights – syncing them to music and arranging effects.

In addition to the music recorded this year by the West County Choir, Orchestra and Orchestra, DelMonte has chosen choral and orchestral pieces performed by students of El Molino and Analya dating back to the years. 1960. Using open source software, he imported the songs to their pixel controller.

â€œYou could see the sound waves,â€ Hays said. The controller, he marveled, “even sets the beat, so you can add effects.”

Hays played a more technical role. â€œI didn’t want to make sure the wires were all connected and the stuff was working anymore,â€ he said.

This explains his presence on the high school roof the Sunday before Thanksgiving, operating a jury-rigged pulley made up of a pair of eight-foot-long twos and fours and a bicycle wheel.

â€œWe have it MacGyvered,â€ DelMonte said.

They needed the pulley to take two dozen sandbags to the roof, where they anchored the spotlights and light beams which were then hung on the front of the school.

In addition to those speakers, the couple set up a radio transmitter – “it has a range of around 200 feet,” DelMonte said – so people can listen from the comfort of their cars.

Some students acted as narrators, providing a brief history of the two high schools and reading the names of teachers who had attended either. Others, Maker classes from Hays, helped hook the light strands. They will play more of a role in future light shows, Hays added, “now that we know what we’re doing.”

By the time the show opened, the day after Thanksgiving, DelMonte and Hays knew the half-hour program by heart.

“This one has some funny lights in it,” DelMonte said on the evening of Nov. 30, as the West County Choir embarked on Coldplay’s “Fix You.”

“This one has the effect of a fan blade!” Hays poured out, as if seeing the show for the first time.

â€œThe best part is when it splits down the middle,â€ DelMonte said. “It’s coming!”

They had worked hard, but clearly had fun practicing this new tradition. DelMonte, the conductor, was particularly pleased to present the musical programs of Analy and El Molino. Could this holiday spectacle reduce the divide between the opposing factions in West County?

â€œI think it will make people go out just to have a good time, which is why we created it,â€ he said.

Vision may actually be the best character in the MCU