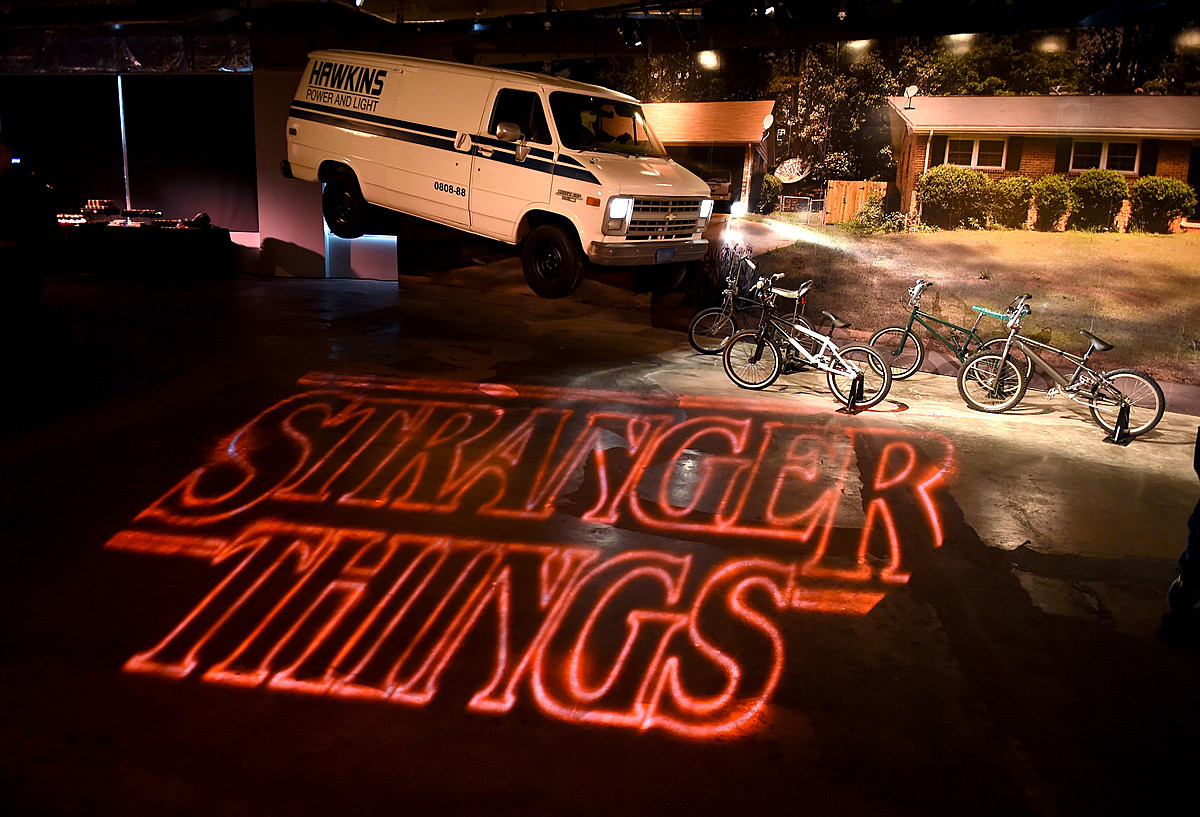 BRICK — If you like Netflix’s hit series, “Stranger Things” and Halloween, you’ll love this spooky treat.

When you think of holiday light shows, you probably think of Christmas first, right?

Well, a township family will welcome “A Stranger Things Halloween Light Show” at their home at 843 Downey Ave. from Friday September 23 to Monday October 31.
Melissa Casqueira and her husband Manny are the masterminds behind this operation, which they have been doing for three years now.

What is the Stranger Things Halloween Light Show?

This year’s synchronized light show is complete with 100,000 LED lights on the house and in the yard, and a few thousand individually addressable pixels where Helmetira can make them any color and run images through them. The show will run approximately every 20 minutes on a continuous loop and will feature soundtracks from the “Stranger Things” series.

“Our addition of pixels during the 2021 holiday season allowed us to address each pixel, to one of millions of different colors. Now we are able to display clipart, jpegs, pdfs of characters or other belongings in our front yard,” Helmetira said.

“This year in Stranger Things we’re going to pick some music from the hit show and then I’m going to program those songs to the lights. When people come home I play the music on the front and you can just turn to the radio station from the comfort of your car to watch the show,” said Casqueira.

The music will be broadcast on 103.1 FM. She said people could get out of their vehicles for a closer look at the Halloween masterpiece, but the show is meant to be watched from inside the cars.

Not only will there be lights and music, but also tons of cool Halloween decorations, including 12-foot skeletons and a 14-foot tree, plus some thousand pixel ball strobes from that tree where she can send images and make them move.

Last year, the Casqueiras did the “A Nightmare Before Christmas” theme where they put the characters Jack Skellington and the Mayor of Halloweentown on the tree and had them talk and dance.

Work has yet to begin for this year’s Halloween light show. “But I’m pretty excited to start finding Stranger Things clip art and images that I can work with, over there on the tree,” Helmetira said.

How is the show constructed?

It’s a husband and wife team operation, she says. Husband, Manny built the display. Their garage and house are covered with tens of thousands of LED lights. The lights are suspended from a PVC pipe, at a spacing of three inches. Any permanent structures, like fences, are also strung with these lights.

During the Halloween season, you might notice a spooky Halloween pumpkin face singing from the top of the family garage. Ms. Casqueira said the pumpkin lantern is constructed from hundreds of LEDs, wooden planks and metal framework, and her husband placed each LED with great care.

During the Christmas season, the spooky face is replaced by a glowing, singing Christmas tree. This, she said, was built with 8-foot corrugated plastic, over a thousand LEDs and countless hours of careful placement.

She said special thanks were due to Danny O’Shaughnessy and his team of All Shoreline Renovations in Toms River, who have been coming every year for the past three years to help her husband set up and take down all the shows for free.

Casqueira said she was the show’s computer programmer. It has 8 computerized controllers that signal on the screen when to flicker, flicker, fade, etc. Five of these controllers contain 16 channels each, or 80 channels of programmable LEDs.

She programs each song, to the tenth of a second. Each channel is individually programmed and coordinated to a soundtrack. Again this year, the soundtrack will consist of songs from “Stranger Things”.

Who benefits from the holiday light show?

While “A Stranger Things Halloween Light Show” is a free event, the Casqueiras will be collecting donations for a local organization called Lead U.

She said that since October was anti-bullying month, she wanted to do something to help make a difference at Brick. So, Casqueira asked the Parents’ Association (PTA) of his son’s elementary school, Emma Havens Young, for suggestions. The association along with the District Harassment, Bullying, and Bullying (HIB) Instructor brought her to Lead U.

Lead U is a group of educators who seek unique and theatrical ways to empower children of all ages to find the leader within themselves. Acquired by the Society for the Prevention of Teen Suicide, they focus on issues such as anti-bullying, empowerment, kindness, leadership, mindfulness and cyberbullying. The organization is very active in the community and will be hosting programs at various schools in Ocean County throughout the upcoming school year.

She said 100% of proceeds from the light show will be donated to Lead U to help with local programming. The money will be collected two ways: front of house in a locked box during shows, and virtually through a GoFundMe account, which has yet to be created.

To help fund the light show, the Casqueira family will be offering custom vinyl designs, shirts and more from their small business, The Casqueira Holiday Light Show Custom Shirts and Customizable Crafts. All proceeds from sales will be donated to their charity, Lead U.

In addition to this year’s Halloween light show, Piper’s Treatsan ice cream truck will stop by on the busiest nights with a variety of tasty treats and freebies.

Jen Ursillo is a reporter and anchor for New Jersey 101.5. You can reach her at jennifer.ursillo@townsquaremedia.com

Spirit Halloween is back: Here’s where to find them in New Jersey

A list of cities in New Jersey where you can find Spirit Halloween stores for 2022. Cities are listed alphabetically. Click or tap on the city names for more details.