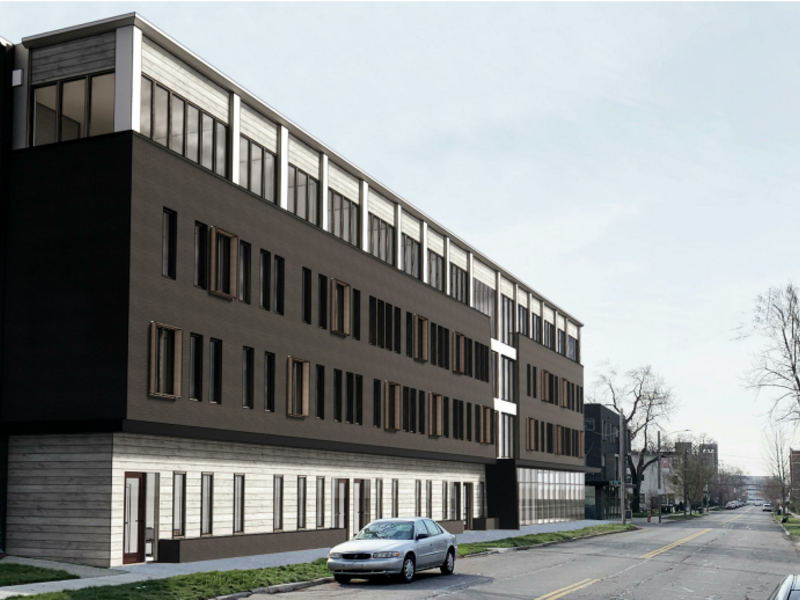 Four years after opening the $ 4 million first phase of The Coe, a joint venture between Detroit-based developer Woodborn Partners LLC and Detroit-based North Coast Partners LLC, is considering a second phase alongside.

The second phase would be considerably larger than the 12-unit first phase, with 16 studios and 37 one-bedroom units in one apartment building and five townhouses for sale in a second building for a total of 58 residences on the corner of Van Dyke. Avenue and Coe Street in the West Village neighborhood of Detroit, according to documents submitted to the Historic District Commission.

Woodborn Partners, led by Clifford Brown, plans to bring back the same team that worked on the first phase, Detroit-based Christian Hurttian Architects and Detroit-based Sachse Construction. North Coast Partners is led by Peter Feinberg and Stephen Tobias and is new to the team.

Brown said construction is expected to begin next year.

As part of the project, the development team is asking HDC for permission to demolish a pair of houses on the development site, one at 1514 Van Dyke and another next door at 1532 Van Dyke. The developers say it’s prohibitive to renovate and / or relocate homes, costing $ 1.1 million to renovate, buy them a new location, and move them.

In addition, the developers claim that SME Environmental performed a structural analysis of the houses showing that “the structures are so fundamentally unhealthy that it is not even possible to move them.”

There will be moving assistance for current residents, Brown said.

â€œWe have spent the last year thinking about how to do this,â€ he said. “The idea is that they come back to the building once it’s built.”

He said the North Coast has property in the area that could accommodate residents in the meantime, or they could find themselves temporarily with another owner.

â€œOur main priority in this regard is to make sure that we are doing well for the current residents who live there and well for the larger neighborhood,â€ said Brown.

The second phase would be another major new development in the area, following the 92-unit Parker Durand, which is nearing completion at the intersection of its two namesake streets, as well as the first phase of The Coe.