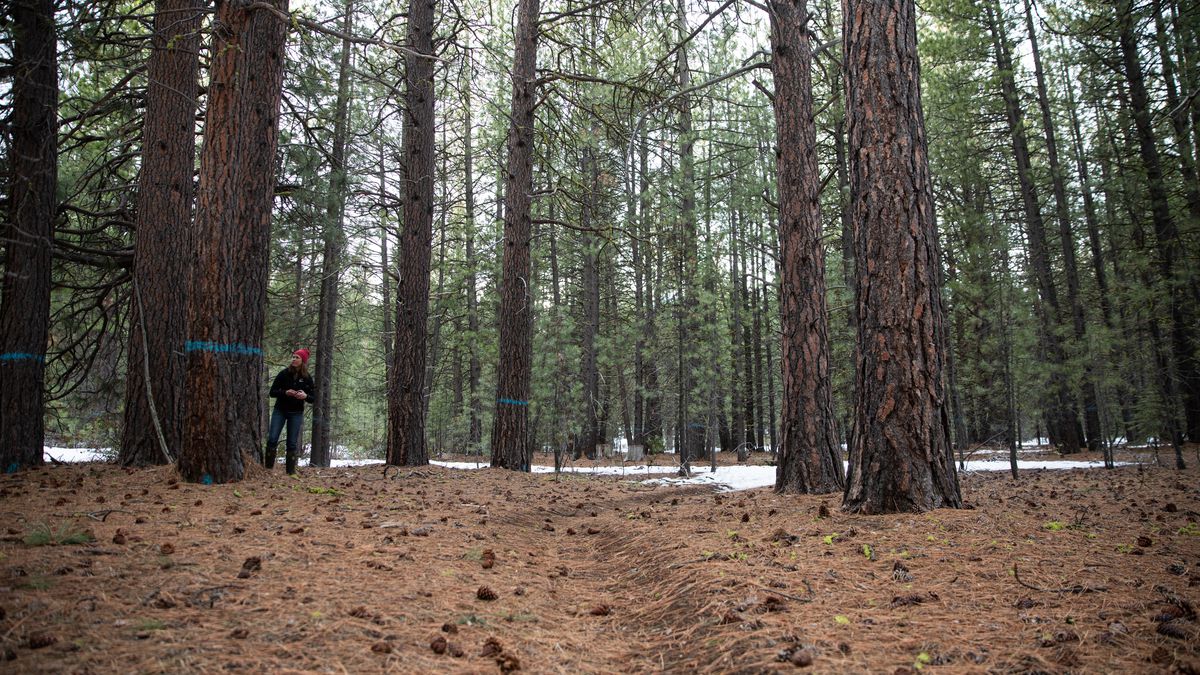 Just steps from the popular Pine Drops mountain bike trail west of Bend, some of the tallest and oldest pines in the surrounding forest may soon be falling.

Blue rings of paint mark the bark of trees in the shape of a puzzle that must be removed during a timber sale that is part of the years West Bend Projecta forest restoration effort that aims to protect the city from catastrophic wildfires through selective logging, mowing, and prescribed burning on 26,000 acres of adjacent National Forest land.

The sale fanned the flames of a long-running debate in Oregon: Which trees are too big to cut? Two key project stakeholders — the US Forest Service and the conservation group Oregon Wild — disagree on the answer.

Oregon Wild raises concerns that several of the trees marked for removal are old ponderosa pines, a rarity in the project area, and that their cutting violates guidelines established when the project began in 2010.

“The project is actually cutting down some of the most fire-resistant trees and calling it fire danger reduction,” said Erik Fernandez, wilderness program coordinator for Oregon Wild. “There’s just no logic to it.”

The Forest Service, on the other hand, says that while a small number of trees are quite old and quite large, none of them are old and all are eligible for thinning.

“These trees are not inappropriately marked,” said Jean Nelson-Dean, public affairs manager for the Deschutes National Forest. “These are not old shoots. They do not exhibit the characteristics of old-growth forests.

The parties disagree on how many marked trees are too big to cut and whether the timber sale is meeting the targets set when the West Bend project started in 2010.

Heavy logging in the early to mid-1900s and years of fire suppression in this forest created the conditions for serious wildfires. The West Bend project was designed to make the forest more resilient to defend the growing city against encroaching fires.

“Without these treatments, this forest on the edge of Bend is much more vulnerable to high intensity fires,” said Deschutes County Commissioner Phil Chang, who has been involved with the project from the start.

Chang co-chairs the Deschutes Collaborative Forestry Project Steering Committee with Bend Mayor Sally Russell. The collaborative advises the Forest Service in its management of the West Bend project and other forest restoration work.

Chang said one of the goals of the collaboration for the project was to preserve the tallest and oldest trees and give them room to thrive in open stands by reducing the density of medium-sized trees and undergrowth. He said that of the thousands of acres of selectively logged forest he has examined for the West Bend project, he believes the vast majority match that intent.

But Chang added that in his opinion, the marked trees that Oregon Wild drew attention to are different — not quite old, but certainly older than most trees in the landscape.

“I don’t think that brand really fits the purpose and need of the West Bend project as a whole very well,” Chang said.

Chang, Russell and Collaborative Vice President Ed Keith released a statement last week saying that “if 99% of the commercially thinned acres are moving our forest in the right direction, we don’t think it’s appropriate to vilify the Forest Service. for the 10 acres that may be inconsistent with the overall intent and vision of the [Deschutes Collaborative Forest Project].”

There are no hard and fast rules in the West Bend Project area dictating which trees are too big to cut.

Oregon Wild has started a petition urging the Forest Service to adopt strict size limits on which trees can be cut in all active projects. For ponderosa pines, the group says the limit should be 21 inches in diameter at breast height, a common measure of tree height, and 24 inches for firs and other large species. The “21-inch rule” was previously enforced on 8 million acres of eastern Oregon for decades to protect larger, older trees, but those rules have changed under the Trump administration.

Oregon Wild’s Fernandez said he’s documented at least three dozen trees in the sale of lumber that would be banned if those rules existed in the West Bend project area. He said that just because the leaders of the collaboration agree that the rest of the forest is being treated properly doesn’t mean those trees aren’t worth protecting.

The marked trees are still standing for the moment. The Deschutes National Forest announced Wednesday that the Pine Drops and other mountain bike trails and logging roads in the timber sales area were to temporarily closed for timber harvesting and forest restoration work from Thursday.

“I fear the chainsaws and bulldozers will be on their way very soon,” Fernandez said.

The trees have been under contract to be cut and marked for about two years, Chang said. Keeping the trees standing would require a renegotiation of the contract with the logging operator.

Focus on income amid volatility