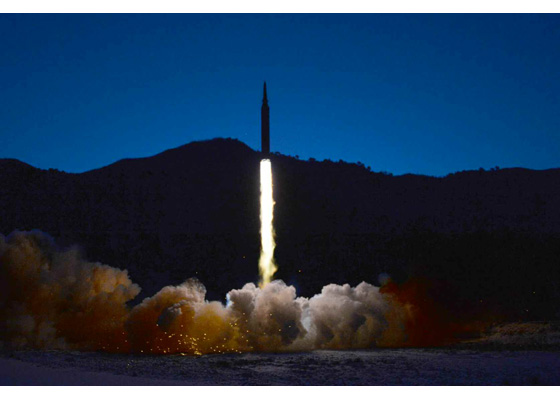 It is understandable that even during the most serious European security crisis in decades, US Secretary of State Antony Blinken conferred with Japanese Foreign Minister Yoshimasa Hayashi and South Korean Foreign Minister Chung Eui-yong in Hawaii. The three governments urgently need a collective response to the increasingly bellicose stance the Democratic People’s Republic of Korea (DPRK) has taken this year. For example, the DPRK conducted more testing in January than any other month in its history and resumed testing after the 2022 Beijing Winter Olympics. Additionally, indications that North Korea is build a new missile base and new activity at Punggye-ri nuclear test site for the first time in four years suggest further missile testing is likely, including intercontinental ballistic missiles (ICBMs). On March 10, the US Department of Defense announcement that the DRPK missile tests on February 26 and March 4 were aimed at advancing the development of precisely such a system, ending the moratorium on ICBM tests in place since November 2017.

According to a United Nations (UN) group of experts monitoring North Korea-related sanctions, the DPRK has exploited stole cryptocurrency and other cyber theft to support a robust missile and nuclear weapons development program. The American Intelligence Community warns that even the resumption of nuclear weapons testing is possible. For more than a year, the DPRK ignored US and South Korean offers to resume arms control talks and other negotiations. Although the United States imposed additional sanctions against the DPRK in response to recent Chinese and Russian missile launches opposition prevented the UN Security Council from taking a strong collective stance against these tests, which violate multiple UN Security Council resolutions.

Several reasons could explain the sudden increase in missile testing in the DPRK. One possibility is that North Korea is trying to coerce the United States and its regional allies into reduce penalties, accepting its missile tests as a legitimate or at least unavoidable part of its defense policy, or ensure recognition of the DPRK as a nuclear-weapon state. The North can also seek to exacerbate growing divisions among the main interlocutors of the DPRK, such as between the United States and China, South Korea and Japan and the United States and Russia. Another explanation could be that the DPRK hopes to exploit America’s perceived weakness in the wake of the bad Withdrawal from Afghanistan and its concern for other issues, such as the conflict in Ukraine. Other reasons could be that North Korea aims to stay ahead in its missile contest with the Republic of Korea (ROK) or advance long-standing weapons development programs. Internally, DPRK leaders can aim to impress national audiences Where Mark important historical anniversaries over the next few weeks. The increased testing also advances Kim Jong Un’s statement at the eighth congress of the ruling Workers’ Party of Korea that the DPRK would strengthen its arsenal of advanced missiles and other strategic weapons.

Since the North has so many reasons to develop and test missiles, stopping this DPRK missile display anytime soon will prove problematic. The new government of the Republic of Korea and its allies will have to focus for now on strengthening their defense and deterrence capabilities while seeking ways out to avoid escalation and a means of dialogue to guard against dangerous mutual misperceptions.

Notwithstanding these possibilities, the North’s efforts to deploy a fleet of next-generation missiles have military logic. The DPRK will likely need several years of additional testing to operationalize these new delivery systems. However, once fielded, these missiles could potentially help Pyongyang deter military action against the DPRK in peacetime, combat foreign forces in wartime, challenge the credibility of US security assurances to the South Korea and Japan and to provide the North with additional resources. to coerce other countries. Missiles can also increase the risk of crises, wars and escalation by potentially making DPRK decision makers more confident about the employment of force, controlling conflict, achieving quick war gains and deterrence or defeat of US counter-actions.

North Korean defense policymakers are likely concerned that the Pentagon will use conventional precision strike systems to preemptively destroy DPRK nuclear forces, command and control systems and other strategic capabilities. Doubts about assured deterrent capability have prompted nations to invest in offensive strike systems to achieve effective retaliation, notwithstanding missile defenses and other challenges to their deterrents. Like others, North Korean strategists may interpret Russia’s brutal assault on Ukraine as a reminder of the danger weaker countries face when they lack effective nuclear deterrents. Having the ability to threaten offensive and retaliatory strikes against US soil, even with small numbers of ICBMs, is important for the DPRK to deter US attacks.

In addition, the DPRK is acquiring more advanced intermediate-range and short-range missiles to attack US forward forces, US and allied bases and other priority targets. The weakening of Washington’s extensive deterrence guarantees to its allies and partners in Asia further strengthens the North’s coercive ability to intimidate these countries. For example, North Korea can leverage its improved deterrence against US strikes on its territory to make its threats to attack other states more credible.

In its latest five-year plan, the DPRK’s leadership designated the development of hypersonic weapons as a top priority. There are two common types of hypersonic delivery systems, which by definition travel at five or more times the speed of sound. Hypersonic Glide Vehicles are delivered on a ballistic missile into the upper atmosphere and then glide towards a ground target. Hypersonic ballistic or cruise missiles use a rocket or scramjet engine to achieve sustained hypersonic speed.

Since September 2021, the DPRK has announced three hypersonic weapons tests. Although the capabilities of these prototypes remain disputedNorth Korea has demonstrated his stubborn determination and steady progress in the development of defense technologies. Careful planning mandates prepare for the possible northern entry into service of one or both types of purpose-built hypersonic vehicles within the next few years. In response to the progress of the DPRK and China in this area, Japan and the United States are to improve their defense industrial cooperation in the hypersonic field.

Since hypersonic systems present a different threat profile than other North Korean delivery systems, they can endanger ROK and US assets in innovative ways, which could change when and how the North might launch strikes against targets. In particular, hypersonic systems can better circumvent current missile defenses due to their combination of sustained fast speed, increased maneuverability, non-traditional flight paths, and other characteristics. For example, they could fly below the preferred targeting profile of the US and ROK Terminal High Altitude Area Defense (THAAD) missile systems in South Korea, which are designed to intercept missiles at higher altitudes, but above the optimum range for short-range interceptors like the US Patriot or the Korean air and missile defense system. The wing design of some hypersonic systems allows for greater lateral and vertical maneuvers along a shallower trajectory than traditional missiles which fly along more parabolic trajectories. Compared to slower missiles, hypersonic missiles also decrease the response time available to defenders.

Hypersonic missiles can give North Korea an additional means to strike first in a potential conflict. Due to their likely limited number, the North would be incentivized to use them early in a conflict before losing to a ROK-US strike. The DPRK could use hypersonic systems to rapidly attack command, control, urgent, mobile logistics and transport targets and other high-priority targets. By removing these critical systems from the battlefield, the DPRK’s hypersonic systems can facilitate subsequent attacks by the North’s many non-hypersonic missiles and other weapons against other targets.

The new delivery vehicles the DPRK has tested since the start of the year are, like many other missiles from the North, generally dual-purpose systems that can carry either conventional or nuclear warheads.[1] Arming delivery systems with nuclear warheads can amplify their effects by increasing their physical and psychological impacts and compensating for inaccuracies, defenses, and other factors.

North Korea has embarked on an intensive missile testing program in recent months. In addition to the unprecedented number of such launches in such a short time, the new systems are displaying new capabilities, such as hypersonic gliding. Several factors are likely behind this push, which is expected to continue and even intensify until the renewed ICBM launch. Even if conventionally armed, North Korea’s emerging missile capabilities could Craft DPRK leaders are more confident of successfully employing force, achieving quick military gains, and deterring or defeating US-ROK defenses. Newly elected South Korean President Yoon Suk-yeol and his international partners must increase their deterrence and defense capabilities while developing additional means to manage these new challenges.