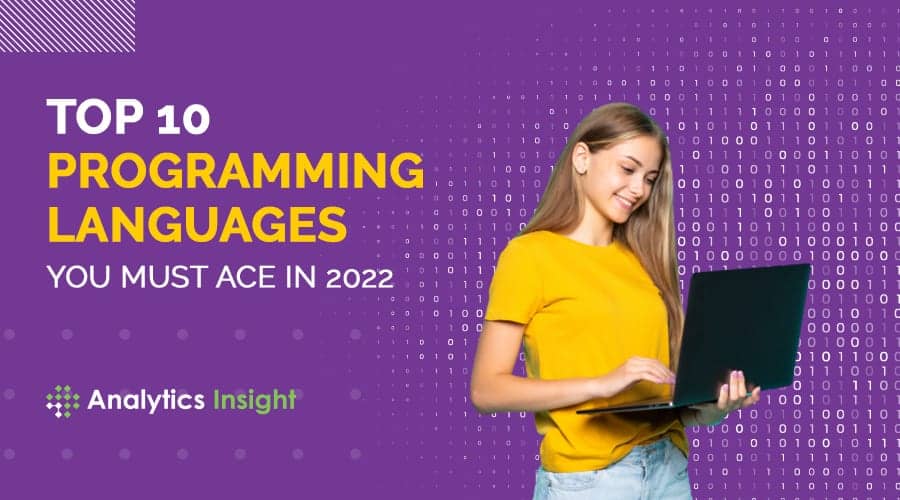 Here is the list of the 10 best programming languages ​​that you must master in 2022 for better growth.

Programming languages like Javascript, Python, C ++, etc., are used by programmers (developers) to give instructions to a machine so that the computer can perform tasks. If you are trying to advance in your career or make a complete career change and you need to master a programming language, you might be wondering which one to learn. After all, it will take time and money to learn the language, so you want to make the right choice. A programming language is mainly used for developing desktop apps, websites and mobile apps. While the world is now more tech-driven, at the grassroots level programming is what enables different technologies and gadgets. This article presents the top 10 Programming languages you must have an ace in 2022 for better growth:

In this tech-driven age, where computers play a very important role, it is almost impossible to say that there is a developer who does not use JavaScript in one way or another. Javascript is a high level programming language which is one of the core technologies of the World Wide Web. The main focus of Javascript was front-end development, but now it can also be used for back-end development, especially after the advent of NodeJS. Javascript is surely one of the best programming languages ​​to learn in 2022.

Python is one of the most popular programming languages ​​today and will continue to be so in 2022 and beyond. It is a high-level general purpose programming language that is easy to learn for beginners due to its readability and support for many useful web libraries and frameworks. This coding language is up 2.17% from its previous positions, which contrasts with a decline for Java over the same period.

Founded in 1991 by James Gosling, Mike Sheridan and Patrick Naughton as “Oak”, Java was the first language to have a big global impact. One of the most widely used programming languages, Java is used as a server-side language for most back-end development projects, including those involving big data and Android development. Java is also commonly used for desktop computing, other mobile computers, games, and digital computing.

Kotlin is a cross-platform, statically-typed, general-purpose programming language with type inference. Kotlin is designed to fully interact with Java, and the JVM version of Kotlin’s Standard Library depends on the Java Class Library, but type inference allows its syntax to be more concise.

PHP is an open source programming language created in 1990. Developers have predicted the impending demise of PHP since 2014. Yet it is a staple scripting language with leading companies like Lyft and Slack’s using. Many web developers will find it essential to learn PHP, as this language is used to create over 80% of websites on the Internet, including those like Facebook and Yahoo. Since then it has grown stronger, but its peak in popularity seems to be behind.

C # manages to maintain its leadership position by a small margin. In general, this programming language dominates much of new technologies today, including web and mobile applications, game development, business applications, etc. C # also has a linguistic structure like other C-determined dialects like C ++, so it’s not difficult to adopt C sharp assuming you know the C family.

In the iOS world, Swift is marketed as a must-have technology for application development. This programming language has eliminated Objective-C and sits comfortably in the top 20 in 2021. Swift requires less coding skills compared to other programming languages, and it can be used with IBM Swift Sandbox and IBM Bluemix.

R is one of the computer programming languages ​​used in the world of data science. Ruby is a well-known programming language that is particularly popular among startups. Frequent travelers like Airbnb, Twitch, and GitHub have been propelled by Ruby. Its demand is bolstered on Ruby on Rails, which is a full stack web application framework that powers Ruby.

The C programming language is number one on the list. But this is hardly surprising. It’s been at the top since 1985, with occasional seconds due to the popularity of Java. Today, C is among the most popular programming languages, mainly because it powers IoT applications. So a growing number of smart devices run on software powered by C. Connected devices need high performance, and that’s exactly what the C language provides.

Column: While it’s hard to admit, Jim Harbaugh was pretty right with his post-game commentary on Ryan Day