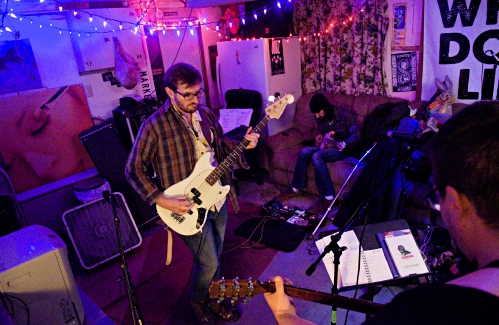 WINDSOR – What Doth Life, the collective of musicians that orbit Windsor, hosted their first music festival a few years ago. There were bands; there were food trucks; it was fun.

The event was sort of a dress rehearsal for 2020, the 10th anniversary of musical creation under the What Doth Life banner.

Too bad for that, with the pandemic.

But the What Doth Life crowd is nothing but persistent, so the festival is back. Starting at 2 p.m. Saturday afternoon, the Windsor Exchange on Depot Street will host eight Upper Valley groups, most of them affiliated with What Doth Life, on two stages. The shows will take place outside; masks and vaccination are strongly encouraged.

â€œWe feel like our small, small-scale festival is probably safe, and we’re on the outside,â€ Brendan Dangelo, founder and lead member of the collective said this week.

The festival provides a welcome opportunity to take a look at What Doth Life, one of my favorite artistic stories going on in the Upper Valley. Snapshot: A group of musicians who grew up together in Windsor and the surrounding area have formed a co-op, write and record their own tracks, support their friends’ creative visions, and provide an outlet for other emerging bands. They’re now in their mid-thirties, with jobs, kids, and homes, and they’re still there.

And, more importantly, the music played by some of these bands – Derek and the Demons, Carton, The Pilgrims, Chodus and others – is very good. Indeed, some of them are awesome, so full of originality, wit and spirit that they fill the heart. When I draw from the extensive What Doth Life catalog, which anyone can do on the collective’s website, whatdothlife.com, I say: why don’t I listen all the time?

The members of the collective know that something special is happening, a collaboration that goes back to college for some of them.

â€œIt’s a constant opportunity to hang out with our friends doing things we love,â€ said Dangelo, a 37-year-old Windsor native who still lives in the city.

Getting into music when they were younger was â€œa saving grace,â€ he said.

â€œWhen you have that, it becomes like the basis of your community,â€ he said.

The idea for a cooperative emerged at a New Years Eve house party in Windsor, with several bands performing. Each group had shared players, said Dangelo, and they thought “maybe we should put an umbrella over this”.

The collective made it easier for them to stream music to the world, through a website, and to book shows.

If the shape of the group is poorly defined, it is by design. While there is a core of players and three prolific bands – Carton, Derek and the Demons and The Pilgrims – other musicians come and go, sometimes joining together to make a record or two before continuing.

â€œIt’s great, because we all kind of speak a similar language now,â€ Kiel Alarcon, who is a member of Carton and Derek and the Demons and was part of McAsh, a ska group that dates back 20 years. (A McAsh meeting scheduled for Saturday had to be suspended because one of the members had a case of COVID-19 in his family.)

The overlap between the bands can be a bit dizzying. Dangelo and Alarcon are both in Carton, along with Ryan Hebert and drummer Bruce Black.

Alarcon is a member of Derek and the Demons, along with Derek Young and Chris Egner. Dangelo, Alarcon and Egner are in The Pilgrims, along with Chris Rosenquest and Davis McGraw.

This team also takes younger musicians under its wing. Hailing from Enfield, Hannah Hoffman performed under the name Hannah and the Wooden Spoons, and Chodus are a young band from Claremont who worked with What Doth Life.

Until then, they all have day jobs. Dangelo works at Dartmouth-Hitchcock as a Program Manager for a Career Grant in Rural Health. Other members work in the field of computer programming, education or engineering.

Rosenquest was one of three members of the Pilgrims working at Hanover Strings, which he now owns.

The members of the collective have never cared so much about fame and fortune.

â€œEvery musical biopic that comes out says it’s not the way to happiness anyway,â€ Dangelo said.

The joy of business lies in camaraderie and creativity. The website calls What Doth Life “a brand that has nothing to sell.”

“If we can continue to the end of our days,” he said, “it will be a very good life.”

The What Doth Life Festival is scheduled for Saturday from 2 p.m. to 8 p.m. at the Windsor Exchange. Free entry. As the organizers say on the event’s Facebook page, â€œMasks and vaccinations are strongly suggested, damn it. Groups include Carton, Chodus, Derek & the Demons, Folquinette, Grief Counselor, The Pilgrims, Trevor Robinson and Time Life Magazines.

Kim Souza, in her original manifesto for Revolution, her vintage and local clothing store in White River Junction, pointed out that in the Upper Valley, fun won’t come after you. You have to make your own.

Souza does this on a large scale several times a year, and one of them is this weekend. Saturday night at 7, Revolution and Nancy the Girl (aka clothing designer Nancy Heyl) are hosting a fall fashion show at the Courtyard Theater in Northern Stage. Admission is $ 20, benefiting the Hartford Youth Council. Masks are mandatory.

The Jenny Brook Bluegrass Festival was canceled last year, but it returns next week at the Tunbridge Fairgrounds.

I’m not going to make an exhaustive list of performers, except to note that despite a Grammy nomination, the Po ‘Ramblin’ Boys are apparently too poor to afford a second O, R and G. the ‘Boys’ is a woman.)

If you like that sort of thing, know that the grounds open early for camping on Tuesday October 5, with performances October 8-10.

Next phase of Google search: context is king