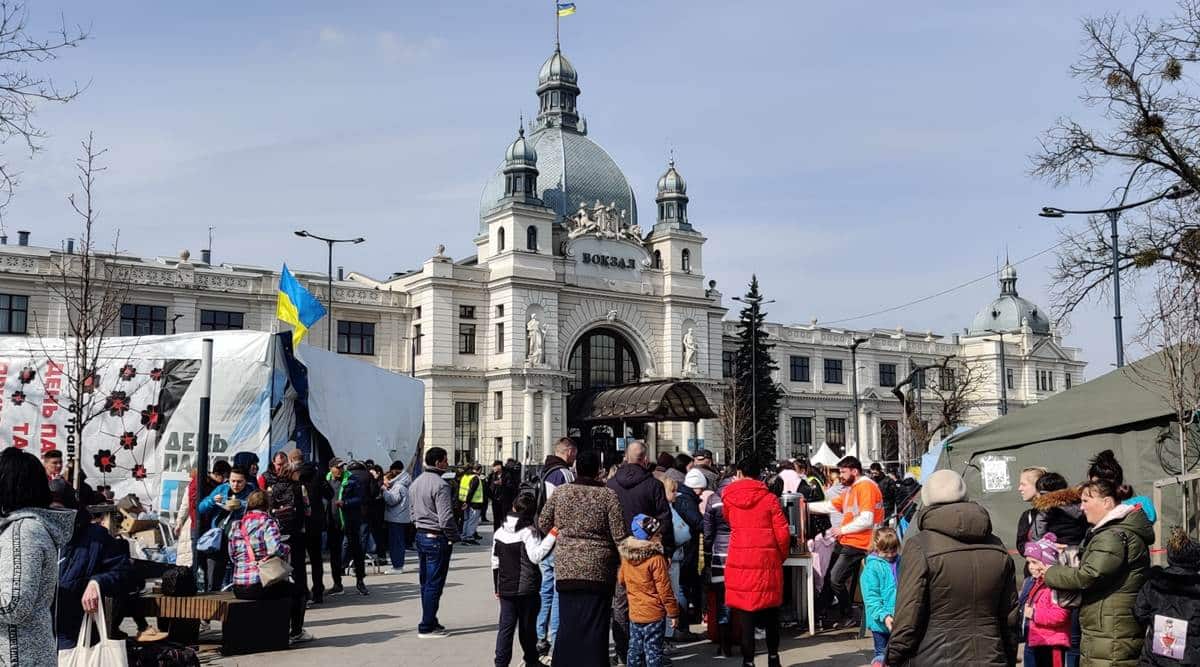 War is a new normal, a trickle returns home under the “illusion of security”

FLEEING their homes in war-torn eastern Ukraine, thousands continue to come to Lviv in the west every day. As they exit the century-old gray-domed station, local volunteers feed them, provide medical assistance and help them find accommodation or travel west into Poland.

But now some Ukrainians have started to return to their homes in the east – few in number but a steady trickle nonetheless, lured by an “illusion of security” with Russia announcing that it will now focus specifically on the Donbass region.

At the start of the invasion, Andrew Ohirchak would see more than 50,000 people coming to Lviv by train. “But in the last ten days or so the number has dropped to 10,000-15,000,” says the 19-year-old computer programming student who has been volunteering outside the station for more than three weeks.

Among the hundreds waiting for the next trip, Violata Siekicheva (42), her mother Nima Ivanona (69) and her sister-in-law Alina (23), who gently cradles her baby in a pram, are not looking for temporary accommodation . They came to the station to find a way home to the southeastern city of Zaporizhzhia on the Dnieper River, which is also home to a nuclear power plant.

Coming from the eastern Donbass region, Russian troops attacked Zaporizhzhia, which is also the main evacuation point for people stranded in Mariupol and other parts of Donetsk and Lugansk. And, the trio fled early with the baby to reach Lviv province about three weeks ago.

Siekicheva’s husband and son are in the local police and stayed behind. When she left, the airport had been bombed, and with the city’s nuclear power plant, they were worried. “Our neighborhood was not bombed, but we could hear the bombs,” she said.

“I am worried about my son and my husband. When we left, the trains were cramped, and it took us 24 hours. The trip was very difficult,” she said. Now they “want to go home” because they are less scared given the current situation – and they “want to be with the men” they left behind.

It’s been more than a month since the war started. A few days earlier, in a sign that it was recalibrating its strategy after being blocked by the Ukrainians, Russia had declared the first phase of their “special military operation” complete. The next phase will focus on the Donbass region, he said.

It remains to be seen how the invasion will play out, but with missile strikes as far west as Lviv on Saturday, and the specter of Belarus entering the war, the larger theater appears to be settled, at least. for now, with no major gains for either side in recent days.

US President Joe Biden underlined this during his speech in Poland on Saturday. “We must commit now to be in this fight for the long term… This battle will also not be won in days or months. We have to arm ourselves for a long fight ahead,” he said.

As both sides put down roots, the new normal has led to a sense of security. Moreover, the unexpected military defense of Ukraine, backed by the West, is a major boost to the morale of Ukrainians who now firmly believe that they can win this war.

Oleksandr Pertsovsky, who heads the passenger rail department, told The Indian Express that the number of people heading west was still low. “If you have, say, 30,000 from kyiv who went west, that’s no more than 3,000 who go east…sometimes people will also bring back their elderly parents or their animals company,” he said.

But then, he acknowledges, there are also families like Siekicheva’s. “This is the first sign that people are ready to go home. Many of those who have moved within the country or beyond have left their homes with nothing and nowhere to go. So as soon as they see that there is at least an illusion of safety, and that they can survive, they start coming back,” Pertsovsky said.

“Some have no home to return to. But at the very first opportunity, people try to come back. We are very happy to bring them back. But I hope in peacetime we can bring them back to safety,” he said.

According to the railway official, 3 million people have gone west by train since the start of the war. “Unless there is another offensive, or an escalation of rockets, missiles, bombs and shelling, I don’t expect another wave. It also depends on whether the sky remains a threat,” he said.

The port city of Odessa, which has around 1 million inhabitants, is however causing concern. “It feels like a safe haven right now. But if Russian troops advance, hundreds of thousands of people will be ready to escape and will have a very narrow window,” Pertsovsky said.

He also pointed out that areas like Mariupol, Donetsk and Luhansk, thousands of people are still stuck and need to be evacuated. “They arrive by the hundreds every day. It’s not only measured by numbers, but also by the situation people are stuck in,” he said.

Humanitarian corridors for people stranded in Mariupol are being developed and 7,000 residents were evacuated on Thursday. “The first wave is behind us. But we are ready,” Pertsovsky said.