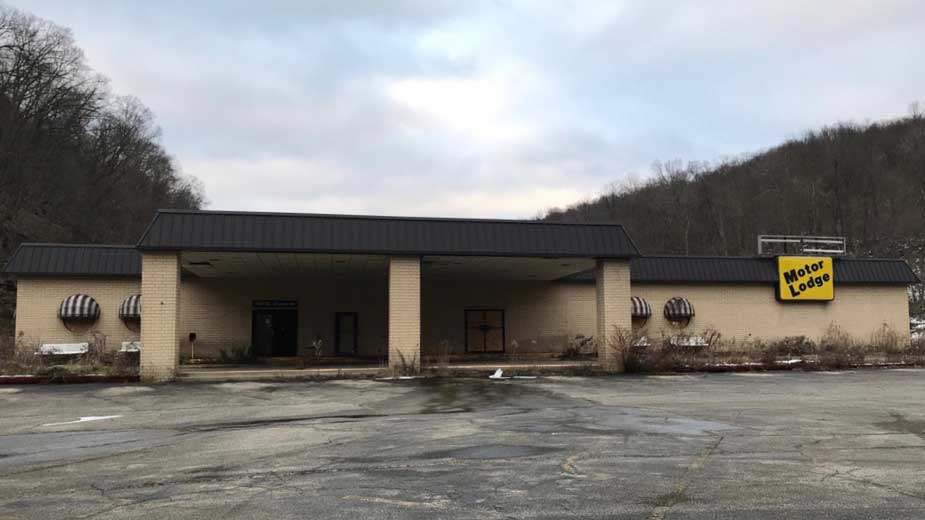 EAST LIVERPOOL, Ohio – By unanimous vote, the East Liverpool Community Improvement Corp. on Tuesday approved the sale of the former East Liverpool Motor Lodge at 2340 Dresden Ave. to a Warren developer with ties to the community.

With member Tom Clark absent, the council acted on a recommendation forwarded by its property committee, which met just before the full council on Tuesday. Members approved an offer from Steven Lewis, president of MVC Advisors LLC, to purchase the property for $150,000.

A native of the city, Lewis was CEO of the former First Place Bank. In his Jan. 18 letter of intent to Mayor Greg Bricker, Lewis said he plans to convert the former motel into a “mixed-use facility” he currently calls River Town Center.

At Tuesday’s meeting, Planning Director Bill Cowan moved the motion to accept the offer, with Chair Pat Scafide offering a second to the motion. Board member Al Fricano asked about the appraised value of the property, which once included a motel, banquet facilities, bar, health club, skylight dining room and swimming pool interior.

Scafide said the CIC had not seen the appraisal obtained by the previous owner, but said he believed it was $1.75 million.

“It’s been three years (since the assessment),” Cowan added.

A recent police report said vandals entered the building and removed the copper plumbing. Scafide pointed out that the previous owner had the walls and ceilings removed down to the plumbing and wiring.

“We showed this building continuous times. It would be up to us to take the $150,000 and run,” Scafide said.

The CIC “has got to do something or it’ll be a grindstone around our necks,” Fricano agreed.

Scafide pointed out that the proceeds from the sale will be used for other CIC projects. Board member and alderman Tom Beagle asked if Lewis had done any other projects, but Cowan said he didn’t know of any in particular.

Contacted after the meeting, Lewis reiterated a previously expressed sentiment that it is “extremely premature” to discuss plans for the property or a time frame in which it could be completed.

Cowan reported Wednesday that the signed letter of intent was sent back to Lewis to allow for the due diligence he was talking about.

Under the terms of the LOI, subject to due diligence, the buyer may elect to have a third party inspection of the property performed within 45 days of signing the purchase agreement and “reserves the right to transfer its rights … to an entity to be incorporated later which may represent the group of investors who will ultimately assume ownership of the property.

Also paving the way for economic development, the board approved a committee recommendation to accept ownership of the property at 606 Dresden Ave., best known as the location of the former 606 Bar but vacant for some time.

Described as “dilapidated” by Scafide, the three-story brick edifice was built in 1900 and was owned by Richard L. Medcalf of Wintersville, who donated it to CIC free of charge. There are no outstanding liens, taxes or mortgages on the property, according to documents provided by Cowan.

“It will be nice to see it disappear,” Scafide said of the imposing building.

Member Lisa Blasdel mentioned concerns previously expressed about environmental issues with the building and whether it will be the responsibility of CIC to address them. It was explained that the actions taken later in the meeting would initiate an agreement between the CIC and the county Land Reutilization Corp. (Land Bank) allowing the Land Bank access to this and other properties to assess them for demolition, including environmental assessments.

The same access agreement was approved for the property at 500 Maryland St., the former East Junior High School building, where an environmental scan was conducted by Tetra Tech.

“We need to get this passed and [the building] demolished,” Scafide said. “It should be done in the spring. When complete we will have six prime acres for development in the East End.

An abandoned house at 433 Prospect St. was also included in the same Land Bank deal, with Scafide saying the house has been uninhabited except for an occasional squatter since 1999.

With the elimination of the blight in mind, the council approved the sale of empty lots at 744 Sophia St. and 847 Baxter St. at $1,100 each to interested buyers. The cost of demolishing dilapidated homes on each property was considerably higher, at $4,500 and $4,700, respectively, but members agreed the lots were unlikely to be of interest to anyone other than the neighboring owners. In addition, zoning restrictions prohibit rebuilding them. Proceeds from sales will be donated to the demolition fund for future demolitions.

The new board member, Herman Potts, was elected by the board with returning members. The re-elected leaders were Cowan, executive director; Scafide, president; Craig Kidd, Vice President; Blasdel, treasurer; and Scott Shepherd, secretary.