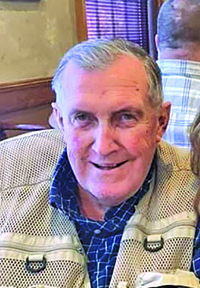 William A. “Bill” Raatz, 73, Edgar, died on Tuesday, September 21, 2021 at UW Hospital in Madison after a long battle with heart failure.

He was born on June 20, 1948 in Berlin, Wisconsin, the son of the late Richard F. and Lauraine (Sauerbrei) Raatz. Bill graduated from Wautoma High School in 1966. He then attended the MSOE in Milwaukee for computer programming. On July 13, 1968, he married Shari Groth in Redgranite. She survives.

Bill started working at St. Joseph’s Hospital in Milwaukee in programming. He and Shari then moved to Marathon City in 1974 where he worked at Wausau Insurance in data processing. In 1976, they moved to their current home south of Edgar. In 1985, Bill started Data Resource with Charlie Dahlke, writing his own computer programs for county governments. Bill ran DRI until his retirement, still doing the bookkeeping until the end.

In 1991, Bill and Shari bought a cottage on North Twin Lake near Phelps. They enjoy many vacations and long weekends of relaxation and fishing. In 1996, Bill and Jon traveled to Ontario, Canada for a spring bear hunt. Bill shot a beautiful faze brown black bear. Over the years, Bill has also hunted elk, mule deer, and antelope in Colorado, Montana, Wyoming, and New Mexico. He was especially proud of his 8×7 moose which he shot near Cortez CO in 2012. Bill had just received his first bobcat license and was looking forward to hunting one this winter. He liked to chop wood, drive his 4 wheeler in the woods near the house and also on the hunting ground. He enjoyed working with wood and making toy boxes for his grandchildren. Her greatest pleasure was spending time with her grandchildren watching their sporting events or teaching them new things.

Besides his parents, he was predeceased by a granddaughter, Alexis Roloff, and three brothers, Jerry, James and Tom Raatz.

The funeral will be at 11 a.m. on Friday October 1, 2021, at St. Agnes Catholic Church, Weston. Reverend Greg Bohren will officiate. Interment will be in the parish cemetery. Visitations will take place from 9 a.m. until service time, all at Sainte-AgnÃ¨s Church. Peterson / Kraemer Funeral Home, Wausau is in charge of the arrangements. Online condolences can be expressed at www.petersonkraemer.com

The concept of integrated deterrence is a call to action